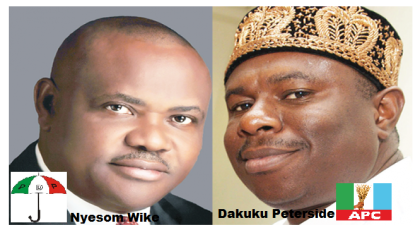 The Rivers State Governorship Election Tribunal sitting in Abuja on Saturday 24th October nullified the election of Nyesom Wike of PDP as governor of Rivers state in the April 11 2015 governorship election.

The tribunal in its verdict also ordered the Independent National Electoral Commission (INEC) to conduct a fresh election within 90 ‎days.

Delivering judgment, the tribunal chairman, Justice Suleiman Ambursa  held that the allegation by the petitioner has been established and that the election was not in compliance with the Electoral Act 2010 which guides conduct of elections in the country

Reacting to the judgment, council to PDP, Chris Uche said the party will test the popularity of the judgment in the court of Appeal and possibly at supreme court.

He  added it was wrong for the tribunal to raise issues on the use of card readers when INEC itself admitted that both card readers and manual registers can be  used where there are challenges.
He further faulted the judgment on grounds that the parties adopted brief in less that 48hours and judgment delivered.

In his reaction the governorship candidate of the APC in the election  Dakuku Peterside said the people of Rivers are happy with the judgment as it will give them the opportunity to vote for who they want.