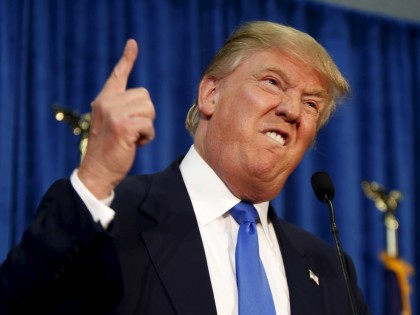 Republican Presidential hopeful Donald Trump called for a complete shutdown of Muslims entering the US “until our country’s representatives can figure out what is going on,” following last week’s deadly shooting spree in California by two Muslims.

Trump statement followed a small group of teenage protesters who are led out by armed police after chanting “Dump Trump” and unveiling “We are all immigrants” T-shirts. The rest of the barn turns on them yelling “USA, USA”

“We do try and focus more on what people do as opposed to the inimitable characteristic of who they are,” US Attorney General Lynch told reporters.

Again, Lycnh who gave a speech in London alongside May, said she could not comment on Trump’s remarks or whether his policy would be legal. However, she said entry to the United States was based on specific criteria and whether someone was legally entitled to be there.

Reports have it that over 100,000 Britons have signed an online petition that Suzanne Kelly, a Scottish-based campaigner and longtime critic of Trump’s latest golf course in Aberdeenshire launched to ban U.S. Republican presidential front-runner Donald Trump from entering the UK following his proposal to ban Muslims from entering the United States.

Donald Trump has been condemned world over for his ‘obnoxious, repellent and dangerous’ outbursts which led British politicians to describe him as a ‘hate preacher’.

British PM Cameron, Jeremy Corbyn, Sturgeon, Boris Johnson and and several UK leaders issued strong word in condemnation of the outspoken businessman after he claimed ‘We have places in London and other places that are so radicalized that police are afraid for their own lives.’

“The UK has banned entry to many individuals for hate speech,” the text of the British petition said.

“If the United Kingdom is to continue applying the ‘unacceptable behavior’ criteria to those who wish to enter its borders, it must be fairly applied to the rich as well as poor, and the weak as well as powerful.”

However, supporters of the UK Independence Party overwhelmingly back Donald Trump’s proposal for Muslim migrants to be banned from entering America was “appropriate”.

The petition had attracted over 100,000 signatures, a number which was rising quickly by midday on Wednesday.