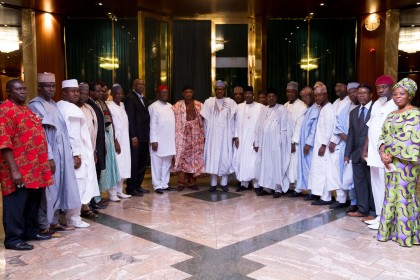 President Muhammadu Buhari Tuesday in Abuja called on Nigerians to support all necessary measures to ensure free, fair and credible elections in the country, including the use of card readers and permanent voter cards.
Receiving members of the newly elected Inter-Party Advisory Council (IPAC) Executive Committee in his office, President Buhari said that more work was needed to perfect the conduct of elections in the country.
The President told members of IPAC that it was regrettable that the electorate in some parts of the country were deprived the use of card readers and permanent voter cards during the last general elections, despite the enthusiasm that followed their introduction into Nigeria’s electoral system.
Referring to recent elections in Kogi and Bayelsa States, President Buhari said it was unfortunate that there were still of reports of unhelpful electoral attitudes.
President Buhari also used the occasion of the visit of the IPAC leaders to thank them for their strong support for his candidacy in the build-up to the 2015 presidential elections.
He congratulated the newly-elected Chairman of IPAC, Malam Bashir Yusuf, who is also the Chairman of the Peoples Democratic Movement.
In his remarks, Yusuf pledged the group’s support to President Buhari’s fight against insurgency and corruption in the country.
He also reaffirmed IPAC’s belief in the unity, progress and indivisibility of Nigeria.