Election Monitor Raises Observations and Recommendations on The 2015 General Elections 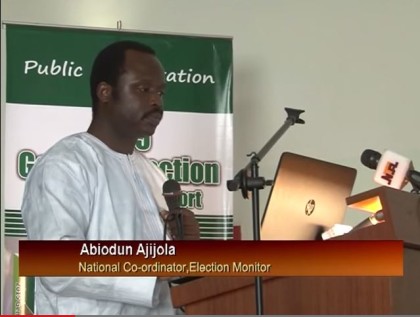 The Independent National Electoral Commission, INEC has been urged to maintain the use of the card reader machine and consider electronic voting in the 2019 General Elections. The National co-ordinator, election monitor Mr. Abiodun Ajijola stated this in Abuja while highlighting the observations of the team in the 2015 General Elections.

The Election Monitor in its report raised pertinent issues, observations and recommendations which sustained the positions at the elections was the most credible in the history of the electoral process. Although the 2015 general elections observed to be the most rancorous polls so far in Nigeria considering the hate speeches involved, Abiodun Ajijola noted that the peace pact signed by the 14 registered political parties, was the outcome of the peace enjoyed in the country today.