INEC To Explore Deployment Of Technology In Collation And Transmission Of Results ~ Prof. Yakubu 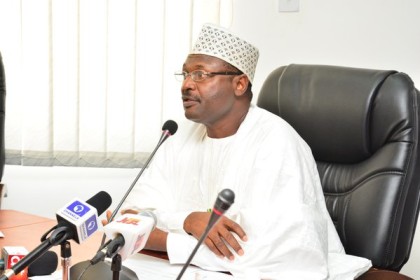 Chairman of Independent National Electoral Commission (INEC), Professor Mahmood Yakubu, has said that INEC planned to further enhance the electoral process by introducing more technology in the collation and transmission of election results in order to make the process speedy, more accurate and technology-driven.
He said the contribution of technology in the 2015 general elections, adjudged as the best in the history of Nigeria, could not be over emphasized, hence the Commission was poised to consolidate on its technological gains.
The INEC Chairman made the disclosure yesterday at the quarterly Commission meeting with Resident Electoral Commissioners (RECs), at the Commission’s headquarters, Abuja.
“This Commission will not experiment. It will rather consolidate. Technology has come to stay.  Not only will the Permanent Voter Cards (PVCs) and the Smart Card Readers remain, but we are going to go a step higher to see if we can also deploy technology for collation and transmission of results so that we make the processes between the conclusion of elections at the Polling Units, the counting and final tally at the Collation Centre speedy and more accurate and technology driven,” he disclosed.
He explained that the Commission was saddled with the responsibility of conducting about 82 Court ordered elections within the first quarter of 2016. Professor Mahmood implored the RECs to work with the Commission in ensuring that it delivered on its core mandate of conducting free, fair and credible elections.
Said he: “we need to put our hands together with RECs and other stakeholders to see how we respond immediately to the decisions of the courts to conduct these elections because we have a maximum of 90 days within which to do so”.
The INEC Chairman further explained that apart from the 82 annulled elections, the Appeal Court had as at last week upturned 15 elections and ordered INEC to issue Certificates of Return to the rightful winners, to which he said the Commission had compiled.
Some of the issues discussed at the meeting include: Continuous Voter Registration (CVR), elections conducted so far by the Commission under Professor Yakubu’s watch, the Smart Card Reader, violence in elections, undistributed PVCs and staff welfare.