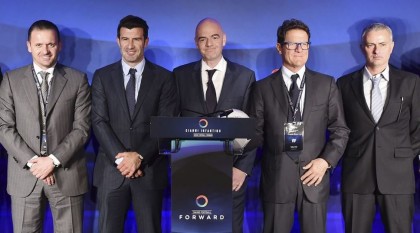 Many football fans, Gianni Infantino name may not tell you anything. But they recognize immediately when told that this man is (bald) who runs the draws for the Champions League. Not a presenter, but the secretary general of UEFA.

And from February 26 may be the next president of FIFA if it exceeds the other four candidates: Jordan’s Prince Ali bin al-Hussein, current vice president of FIFA and loser in the elections last year against Blatter; the Bahraini Sheikh Salman bin Ibrahim Al Khalifa, president of the Asian Football Confederation; Frenchman Jerome Champagne, former general secretary of FIFA; Tokyo Sexwale and South Africa.

Monday, Infantino summoned the media in the londidense Wembley to explain his electoral program and the actions they perform in their first 90 days in office. Surrounded friends did, as he calls them. Next to Blatter were Jose Mourinho, Luis Figo (who was a candidate in the elections of 2015), Pedja Mijatovic, Roberto Carlos, Fabio Capello, Francesco Toldo, Geremi Njitap, Vladimir Smicer … A demonstration of public relations. They are just a few of the many friends who have given their support, as can be seen on the website of the bid. The only woman among your friends of course, is the Spanish Veronica Boquete.

Those supports are important, but far from definitive. National federations are voting, and to convince Infantino has been dedicated in recent months. Already it has the support of some European federations, such as Germany, France, Switzerland, Portugal, Finland, Romania and Luxembourg; other Caribbean such as Trinidad and Tobago, Suriname and Barbados; and executive committees (who do not vote in the election as such, but may influence its members) of the South American Football Confederation (Conmebol) and UEFA, of course, that has financed his campaign with 500,000 euros.

Infantino right hand of Michel Platini (already out of the race for the presidency) in the UEFA, where he has held various positions since 2000, the candidate was proposed last October. Then, in the middle of the scandal that has ended the disqualification of the French leader and Joseph Blatter, UEFA decided to propose to its current secretary general, a figure of consensus.

That move is aimed at gaining the support of the African and Caribbean federations, which segunramente be decisive in the election. Assuming that Infantino will have the support of European football and that Shaikh Salman bin Ebrahim Al Khalifa will receive the federations of their continent, Africa and the Caribbean can tip the balance.

“The first thing to do is implement reforms compliance and good governance; we must make the bidding process more transparent and explain well how to enter and leave the money,” said Infantino, who announced that if the intention is to limit mandates President and board members to 12. 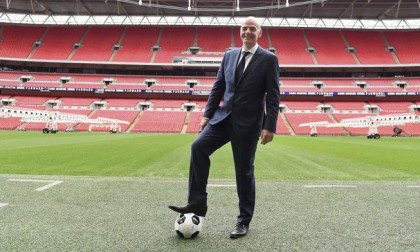 As announced in the manifesto of his candidacy, published last January 20, Infantino insisted that his intention is to expand the number of participants Mute Cup to 40 teams from the 32 that are currently playing. That idea is in line with the changes he and Platini have promoted in recent times in the UEFA, which this year will debut a format with 24 teams, 8 more than in previous editions.

It also aims to copy the multi-site model that European tournament selections released in 2020, thirteen cities across the continent welcoming party. The candidate for the presidency of FIFA believes that the World Cup may be organized by “four, five or six countries”. “We must embrace more countries. We have experience in the UEFA, which many criticized, but that drives the popularity of football. In addition, more games means more money to reinvest in football,” Infantino said.

“We should not be ashamed to generate money, on the contrary, we should be proud of. But everything must be open, fair and transparent,” said the candidate, who spoke of the need to restore relations with trading partners in recent months They have urged FIFA to make reforms. “They are vital. We need to rebuild trust in recent months and have a good reputation and clear.”