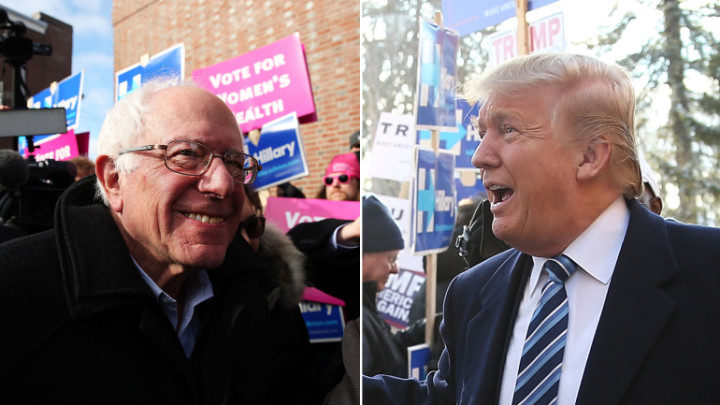 Republican Donald Trump and Democrat Bernie Sanders coasted to victory on a wave of voter anger in the New Hampshire presidential nominating contest, thrashing traditional U.S. politicians in a display of anti-establishment power.

Sweeping wins by Trump, a New York billionaire, and Sanders, a democratic socialist, on Tuesday testified to the sizable share of American voters upset at U.S. economic conditions and willing to send a shockwave to Washington in the Nov. 8 presidential election.

New Hampshire’s verdict sets up a tough fight for Republicans in South Carolina on Feb. 20 and for Democrats there on Feb. 27. Some of the most monumental campaign battles in elections past have been fought in the state that holds the first primary election of the American South.

For Trump, New Hampshire showed he has staying power and can take a punch after losing on Feb. 1 to Texas Senator Ted Cruz in the first contest, the Iowa caucuses. His win showed pundits were wrong to think he would ultimately self-destruct based on his penchant for insults and imprecise plans for the presidency.

Democrat Hillary Clinton, the former U.S. secretary of state and former U.S. senator, now looks wounded, trailing Sanders by 60 to 39 percent based on 86 percent of the returns.The wife of former President Bill Clinton, Clinton barely won Iowa and now has been trounced in New Hampshire, where young voters liked Sanders’ populist proposals to break up big banks and have the government pay for free college tuition.

“People have every right to be angry but they’re also hungry, they’re hungry for solutions,” Clinton, 68, said after congratulating the 74-year-old Sanders. “I will work harder than anyone to actually make the changes that make your lives better.”

Clinton was headed to New York, home to her campaign headquarters, to regroup with top aides and prepare for Thursday’s Democratic debate. Her campaign has denied reports it is considering a shakeup but acknowledged it would be natural to add members to their team as the campaign progresses.

Sanders said his victory showed “we have sent the message that will echo from Wall Street to Washington, from Maine to California, and that is that the government of our great country belongs to all of the people and not just a handful of wealthy campaign contributors.”

Some 73 percent of voters say they think the United States is on the wrong track, and these disaffected people make up a majority of the support bases for Trump and Sanders, according to a Reuters/Ipsos poll.

They are worried about the economy and distrust establishment politicians they perceive as being part of the problem. 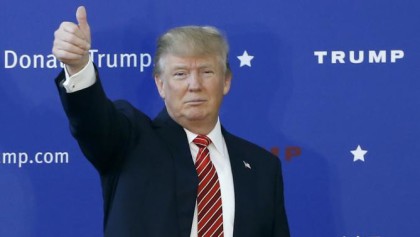 Trump, 69, who has campaigned to deport illegal immigrants and temporarily ban Muslims from entering the United States, was in first place with 35 percent of the vote on the Republican side based on 88 percent of returns.

At his victory rally, Trump dispensed with niceties. He congratulated other candidates in the race but promised to soon return to his pugnacious approach.

The New Hampshire Republican race did little to clear up confusion about who would emerge as the establishment contender to Trump on the Republican side.

Bush, the son and brother of former presidents, lived to fight another day, making something of a comeback after a strong debate performance and solid weekend of campaigning.

“While the reality TV star is doing well, it looks like you all have reset the race,” Bush told supporters. “This campaign is not dead. We’re going on to South Carolina.”

Rubio failed to dispatch Bush, seeing a drop in his support after a debate on Saturday in which he drew criticism for repeating rehearsed lines from his stump speech.

“I did not do well on Saturday night – listen to this: that will never happen again,” Rubio told supporters.

New Jersey Governor Chris Christie, who called out Rubio for his robotic debate, fell behind the others in the voting and canceled plans to go to South Carolina, a sign he could drop out soon. 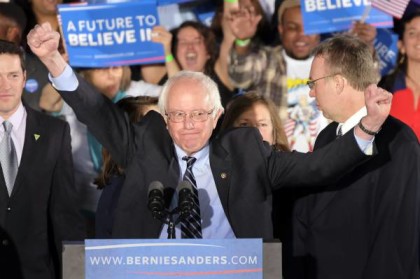 Independent voters wield special clout in New Hampshire, second in the series of state-by-state contests that lead to the parties’ formal presidential nominating conventions in July, because they can vote in either party’s primary.

At a polling station in Manchester, Joan and Roland Martineau said they voted for the two candidates they believed they could trust to shake things up.

Roland, 73, a registered Republican, went for Trump, a man he said was “more honest” than other candidates. But he said he would back Sanders over Trump in the general election in November.

Clinton had for months been the front-runner nationally. But a Reuters/Ipsos poll done Feb 2-5 showed Clinton and Sanders now in a dead heat.

Clinton campaign manager Robby Mook said in a memo that the Democratic nomination would “very likely” be decided in March, with the support of black and Hispanic voters key to victory. The next primary races are in Nevada and South Carolina later this month.

“It will be very difficult, if not impossible, for a Democrat to win the nomination without strong levels of support among African-American and Hispanic voters,” Mook wrote.

SAP is the sponsor of this content. It was independently created by Reuters’ editorial staff and funded in part by SAP, which otherwise has no role in this coverage.