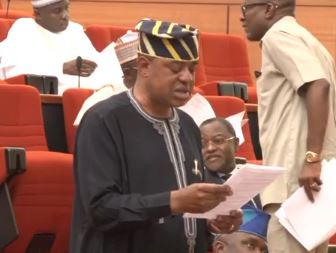 With four weeks left for its implementation, Senate accelerated the passage of the FCT 2015 appropriation act, by stepping down its rule 79 to read the bill for the second and third time and pass it, the act is now to be scheduled for harmonization, at the conference between the Senate and House Appropriation Committee.
Also, Senate advised the Presidency to restructure and reposition the National Drug Law Enforcement Agency (NDLEA) to meet the challenges of drug traffickers using Nigerians to traffic drugs, these was contained in a motion by Sen. Gbenga Ashafa from Lagos State and Twenty one other Senators, it was referred to the Senate Committee on Drugs, to consider among other things an urgent amendment of section 23 of the Pharmaceutical Council of Nigeria act to include the sale of prescription pills over the counter as an offence punishable by the act.