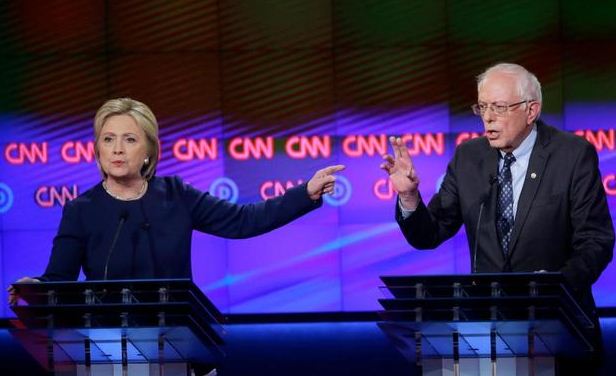 They both bashed the level of debates in the Republican race to White House.

The contenders clashed over trade and the auto industry bailout, as well as a lengthy discussion of religion, Clinton and Sanders both said they could not wait to face the brash billionaire in the Nov. 8 election to succeed Democratic President Barack Obama.

“I think Donald Trump’s bigotry, his bullying, his bluster, are not going to wear well on the American people,” Clinton said. “We have to end the divisiveness, we have to unify the country.”

Sanders said he would “love” to run against Trump and noted many opinion polls showed him faring better against him than Clinton did. He and Clinton urged voters to compare the substance of their debate with the Republican versions, which last week featured name-calling and Trump defending his penis size.

“We are, if elected president, going to invest a lot of money in mental health,” Sanders said, then cracked a joke. “And when you watch these Republican debates, you know why we need to invest in mental health.”

Trump frequently says he will beat either Clinton or Sanders. “I am the one person that she does not want to run against,” he said of Clinton on Saturday.

The debate in Flint, which is suffering a water contamination and public health crisis, came as Sanders has struggled to slow Clinton’s march to the presidential nomination. Sanders picked up some good news on Sunday with a projected win in Maine’s caucus.

Clinton, 68, a former secretary of state and first lady, has spoken on the campaign trail of the need for more love and kindness, a contrast to Trump’s rhetoric about his plans to deport illegal immigrants and temporarily bar Muslims from entering the country.

Describing herself as a “praying person,” she said it was hard to imagine living under the pressure of the White House “without being able to fall back on prayer and on my faith.”

Sanders, asked if he was deliberately keeping his Jewish faith in the background on the campaign trail, said his father’s family was wiped out in the Holocaust. He described going shopping with his mother as a boy in Brooklyn, New York, and seeing people with numbers on their arms from Nazi concentration camps.

“I am very proud of being Jewish, and that is an essential part of who I am as a human being,” Sanders said.