Senate President, Dr. Abubakar Bukola Saraki today told the four surviving children of late Minister of State in the Ministry of Labour and Productivity, James Ocholi – Ojome, Aaron, Blessing and Elle – to remain strong and work towards sustaining the good legacies that the late Senior Advocate left behind. 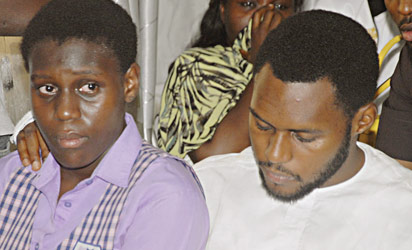 Saraki who led a 16-man delegation of the Upper Chamber of the National Assembly to the Abdulrahman Mora Street, Kado, Abuja home of the late Minister of State said Ocholi was a hardworking and devoted family man who worked alongside late Abubakar Audu to take the All Progressives Congress (APC) to the nooks and crannies of Kogi State.

“We worked closely together during the teething days of the APC having come from the same North Central zone. He did a great job and demonstrated his brilliance, dedication and commitment. Now he is gone. We cannot question God. He sets his own time for all of us “, the Senate President said in his short but emotion-laden speech.

He promised that the close associates of the late minister will not forget the family and that they will continue to support the family. The Senate President also prayed to God to grant the family the fortitude to bear the loss and move forward.

While writing in the condolence register, he described Ocholi as “a committed party man” and prayed to God to grant him, his late wife and son, eternal rest”.

A Personal Assistant to the late Minister, Dr. Hammond, who spoke on behalf of the family said that it was true that Ocholi had a personal relationship with the Senate President as both men worked hard to entrench the APC in North Central zone.

He thanked the Senate on behalf of the family for deeming it fit to pass a resolution and follow It up with a visit.

Earlier the Senate had passed a resolution moved by Senator Dino Melaye urging it to observe a minute silence in honour of the deceased persons, urged the federal government to immortalise him, prayed the Kogi State Government to grant scholarship to the children still in school and finally send a delegation to condole with the family.