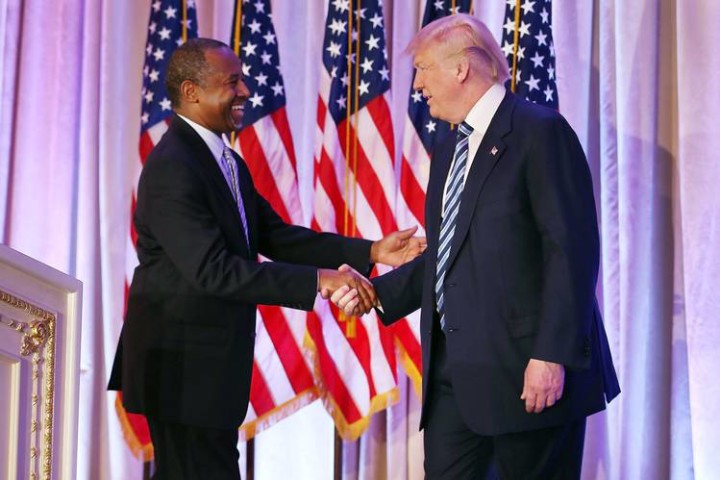 “There are two different Donald Trumps: there’s the one you see on the stage and there’s the one who’s very cerebral, sits there and considers things very carefully,” Carson said as he became the second former Republican candidate to back Trump in the White House race.

The soft-spoken retired neurosurgeon, who dropped out of the race last week, addressed the issue of Trump’s combative and sometimes crude public image, saying the American people would be “comforted” when they discover a gentler side.

“That’s the Donald Trump that you’re going to start seeing more and more of right now,” Carson said during a joint appearance with the real estate magnate at Trump’s Mar-a-Lago Club resort in Palm Beach, Florida.

“I have found in talking with him, that there’s a lot more alignment, philosophically and spiritually, than I ever thought that there was,” he said.

A few hours later, at a public appearance in St. Louis, Missouri, Trump’s speech was interrupted repeatedly by protesters who were led out of the event by police and security, an increasingly common occurrence at his raucous rallies.

“He’s all mouth, get him out,” Trump shouted as one of the protesters was led out. “Go back to mommy,” he said as another protester was led away.

The latest endorsement for Trump followed a Republican debate in Miami on Thursday night at which Trump and the remaining three candidates in the Republican race struck a markedly more civil tone.