The National Chairman of the All Progressives Congress (APC), Chief John Odigie-Oyegun on Tuesday said the death of the late Minister of State for Labour and Employment, James Ocholi (SAN) was a “personal loss” to him. 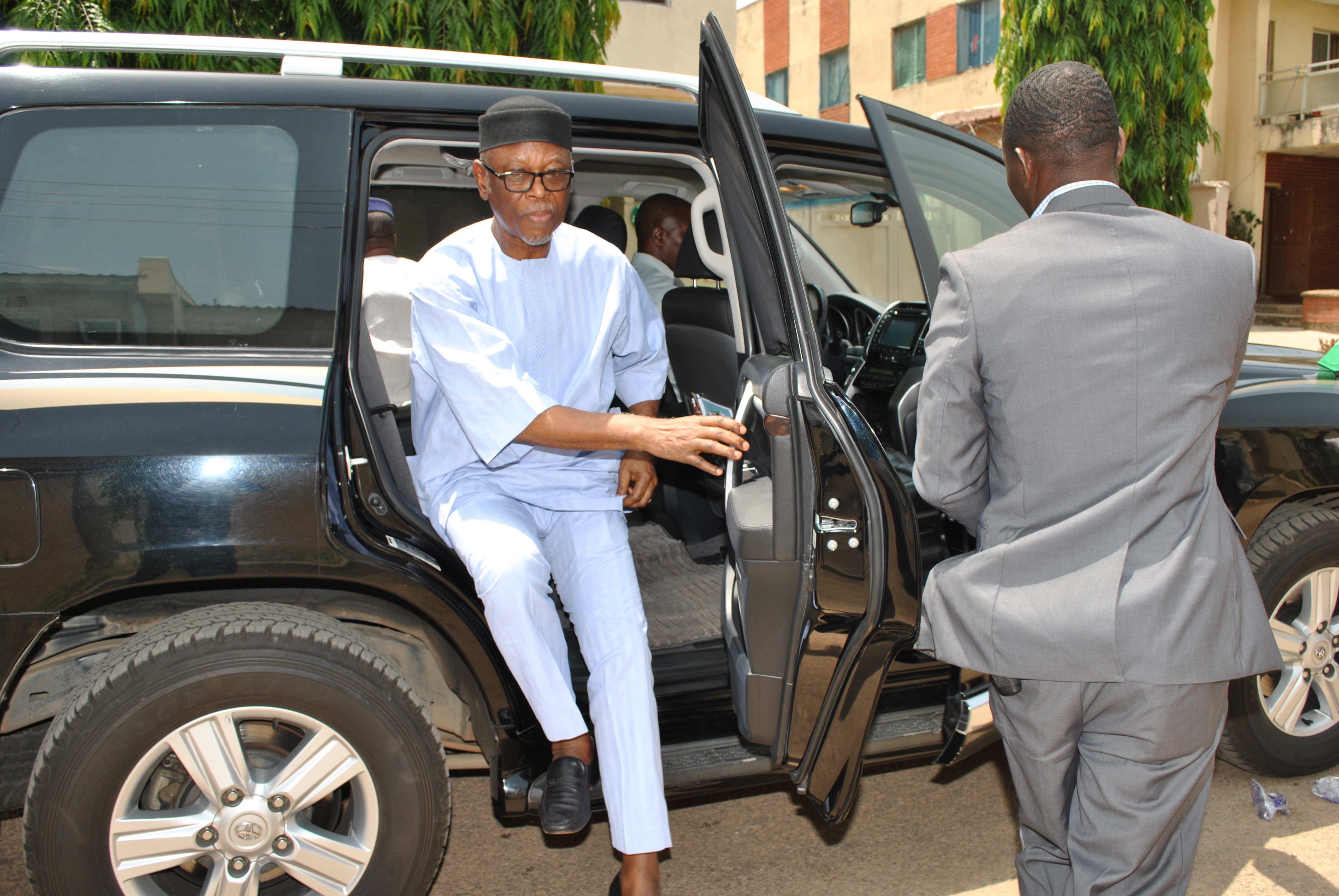 Photo Caption: The APC National Chairman, Chief John Odigie-Oyegun arriving the Abuja residence of the late Minister of State for Labour and Employment, James Ocholi (SAN) on Tuesday for a condolence visit.

Odigie-Oyegun said this during a condolence visit to the family of the late Ocholi who died in a ghastly car accident with his wife and son along Kaduna-Abuja Expressway on Sunday, March 6, 2016.

Odigie-Oyegun spoke to journalists after meeting with the late minister’s family: “We are here on a condolence visit to the family of James Ocholi who was also the former interim Deputy Legal Adviser to the party whom I had course to consult with often whose thought processes and mine were very very similar.

“It was for me an issue of very deep sadness and made even graver by the fact that his wife and a grown up son also passed in the same incident. So for me it is a very personal loss. And from the point of view of the party, he was ever a dedicated believer in change, dedicated party man because you could call on him anytime.

“He was always in the office over one issue or the other even though he did not have a permanent office table. He was very very dedicated to the course of his people and the people of Kogi State. And at every point I needed help, explanation, or whatever, he was there to provide it, to give me the issues behind. So really, one mourns with sincere, very sincere, deepest form of sorrow even considering the circumstances in which all these have happened and that he has four children who are now fatherless, motherless but like I said, God will be their father, God will be their mother and God will provide sufficiently for them at every stage of their lives.

On the APC plans for the late minister, Odigie-Oyegun said: “Honestly, that will be something we will deal with. It is not something at this stage to give to the press but he was a deserving party member and the party will turn out and honour him in the way hierarchy deserves.”

Daughter – Ojone Ocholi
Thank you for coming, taken out time out of your busy schedule to be here. If we hadn’t an idea of who he was before, the responses we have gotten from everyone who has been here has given us a clearer picture of whom our father was. We are indeed proud and we take courage from that to move forward. We hope that we keep the spirit of who he was, and who our mother was and the lesson and virtues they upheld. We hope to be able to carry on from here.

Son – Aaron Ocholi
We really appreciate your presence here today. You have said all these things about my dad and it is evident that his heart was for service, to serve his nation, to serve his people and even people whom he felt could not stand for themselves. I can only pray the grace on the men here present because the men in this room right now in one way or the other determines the tides and the future of this nation. One way or the other as a party currently in government, these are men of utmost importance and I can only ask and pray for grace, the grace to be the best you could be to your people, to the country, to even people around you, to lead this nation to greater height make it better. If just like him, everyone will realize that it is not just about me but that there is a greater picture because I know that that is how he lived his life. To me he was selfless. There were many times I will sit down with him while he was making phone calls and at the end of the phone call, he will drop the phone and I will know that he was about to make a serious decision. Many times he conceded a lot of things for the greater good and I pray the grace of God to be on all of you to be able to make such decisions for the greater good. Thank you all for coming