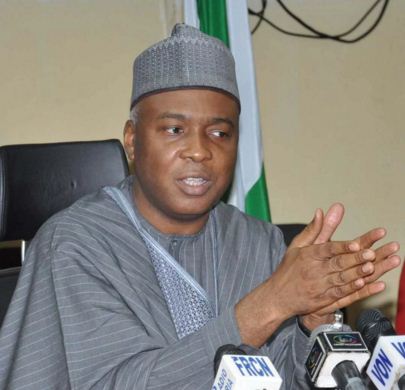 Senate President Bukola Saraki has advised Nigerian women to re-introduce the Gender Equality Bill, which was rejected by the National Assembly on Tuesday.

This was disclosed in a statement signed by Ms Fatima Kakuri, Special Assistant on Gender and Equality to the Senate President, made available to the News Agency of Nigeria (NAN) on Wednesday in Abuja.

The bill seeking gender equality was sponsored by the Deputy Minority Whip of the Senate, Biodun Olujimi.

The bill was rejected by the Senate over alleged constitutional violations.

Saraki therefore said that although the bill had suffered setback, it could still be amended and re-introduced.

“Unfortunately, the bill suffered a slight set back because there were some parts of the bill that some senators disagreed with along the lines of religion and tradition.

“The beauty of democracy is that it gives us the opportunity to consider different opinions and this bill can still be represented and reconsidered on the floor of the Senate.

“I have it on good authority that Sen. Biodun Olujimi, who introduced this bill will reintroduce it after re-drafting it to address some of the reservations that were expressed on the floor of the Senate.

“As I said during the International Women’s Day last week, I am of the opinion that there are substantial parts of the bill that are crucial to the development of our nation.

“Such bills like the Equal Access to Education, Strengthening of the laws on Violence against Women, Ending Abduction of Girls, Sustenance and Promotion of Entrepreneurship Opportunities, Gender Mainstreaming and Gender equality are equally important,” he said.

This this is the third time the Gender Equality Bill would be rejected by the National Assembly, and the recent rejection has attracted a lot of reactions from different women groups.