Pursuant to the Orders of the Court of Appeal, the Independent National Electoral Commission(INEC) conducted elections into various seats in both the National and the Rivers State House of Assembly yesterday, the 19th of March, 2016. 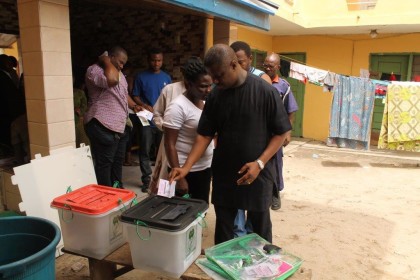 Rather unfortunately, some of these elections witnessed the disruption of the process, including the barricading of some of the INEC Local Government offices and Registration Area Centres(RACs) used for the distribution of Electoral materials which led to the late commencement of the exercise in some places and consequently, its smooth take off.

Of more serious concern was the level of threats, violence and intimidation of election officials and voters by well armed thugs and miscreants allegedly acting on behalf of some politicians, which marred the elections in some areas. There were reports of numerous attacks resulting in fatalities, kidnappings, ballot snatching, diversion of officials and materials, amongst others, which necessitated its suspension in 8 Local Government Areas.

Regrettably, such deviant behaviour has continued today. Several permanent and ad hoc staff engaged have been attacked, again resulting in fatalities, while some have been forcibly abducted and taken to presently unknown destinations.

Under such difficult circumstance, the Returning Officers were only able to collate and declare results in 1 Federal and 9 State constituencies where the disruption and malpractices were not so widespread.

Having reviewed the situation, the Commission is compelled to suspend all further action concerning the exercise in all the other constituencies in the State pending the receipt of a comprehensive report from its Field Officials and Monitors. For the avoidance of doubt, it should be noted that the suspension does not affect the constituencies where the exercise has been completed and the results declared by the Returning Officers.