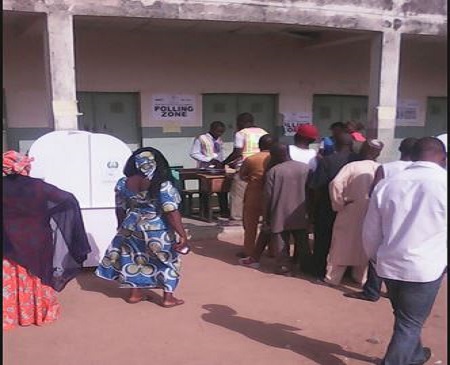 Voters and party agents in Gwagwalada have commended the Independent National Electoral Commission (INEC) for conducting a smooth election in the area council.

Some of the voters, lauded the INEC’s new rule that allows voters to cast their votes immediately after accreditation.

They said that the new system made the process smoother and faster unlike the usual practice of accrediting all the voters before commencing voting hours later.

Mr Amos Stephen, a business man who voted at the Old Kutunku 001 polling unit said that the process was the smoothest he had seen in years.

He said that the area was notorious for violence during elections but added that this time; it was orderly as everybody conducted themselves peacefully.

He specifically commended the INEC officials, especially the corps members for the way they handled the election.

He said that from 7 a.m. when they arrived the election was conducted “very smoothly’’.

However, a party agent for the People’s Democratic Party (PDP), Mr Johnson Usman, said that the only hitch witnessed was when some men alleged to be from another political party came to share money to influence votes.

He said that they had come with a bag full of money to distribute to the voters but they were shortly dispersed by men of the Police Force.

Meanwhile, security operatives were seen trying to disperse the crowd who had already voted from the voting area.

Most of the polling units were seen rounding up their election as at about 2:30 as they defied the heavy rain to complete the process.

At the University of Abuja Quarters, the INEC officials were seen in the security post at the gate trying to conclude the election at it rained heavily.

Though drenched, the INEC officials still carried on their duties with enthusiasm and commitiment.

Miss Temitope Banwo, Presiding Officer at the unit said that they all “swore to serve Nigeria under sun and rain,” and that the zeal was part of their commitment to national service.
(NAN)

NEWER POSTFounding Member Of Boko Haram In DSS Net, A Major Breakthrough In The Fight Against Insurgency
OLDER POSTPoor Use of Internet By Nigerians Shows Decline In Number Of Users As Figure Drops To 93.7m In Feb