US To Sanction South Sudan With Embargo

The U.S. said it would consider imposing an arms embargo on South Sudan’s leaders if they fail to cooperate in a proposed unity government to end conflict in that country. 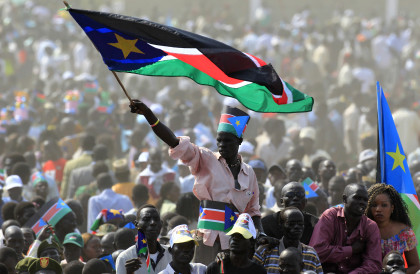 The U.S. Special Envoy to Sudan and South Sudan, Donald Booth, told lawmakers on Thursday in Juba that they have everything at the table and fully prepared to look at sanctions and arms embargo such there be any backtrack.

He said an arms embargo could only work if neighbouring countries cooperated.

The UN Security Council had threatened to impose an arms embargo on South Sudan but veto-power Russia had been reluctant to support the action.

Booth stressed that the an effective way to cut weapons supplies to South Sudan, was to impose strict controls over its capital expenditure, which would also help focus spending on the neediest.

“We all agree there are far too many arms in South Sudan and they certainly don’t need any more”.

“If we can use the financial side to get at preventing additional weapons from getting into South Sudan, that would be an easier way to do it and a more effective way to do it,” he said.

He said the U.S. was looking at who was responsible for the pillaging of state coffers.

“We really want to make sure that resources of the country are going to be utilized for the people, so we’re taking a careful look at what has been stolen in the past and who stole it.

“We have already put the existing government and the opposition on notice that we would be looking for some kind of expenditure control mechanism in place.

“Otherwise it will be very difficult to justify putting additional resources in support of stabilization of the macro economy,” he said.

Meanwhile, he disclosed that U.S. has pledged an additional 86 million dollars in humanitarian aid to help communities most hurt by the conflict.
He recalled that it has provided an estimated 1.6 billion dollars in assistance to the country since December 2013.