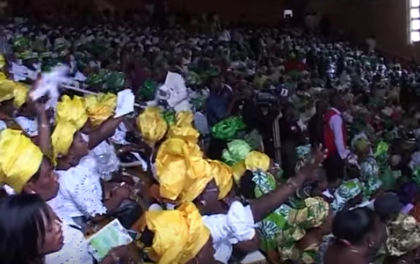 Talatu Ezirike(Abuja): A nation’s growth is in part measured by the advancement of its human capital resources. This includes women and children who are the vulnerable group, yet critical development against this background looks at how well; women have fared in the first year of the Buhari administration

So, it was gratifying that President Buhari had in inception established a template for a better deal for women with the compelling pronouncement that at least one female be appointed as member of the executive council in every state, a directive that made some states have two or more female members.

Special adviser to the president on foreign affairs and diaspora in her view, urge women  to help in lifting up other women as this administration wants to take care of every woman  and wants to create  enabling environment and generally make our system better for everyone of us to live in.

How enabling is the environment to achieving a 50-50 by 2030 for women?
A good percentage of women that reside in the rural areas and faced with challenges that include poverty, access to loan or capital, poor labour and neglect. The trends are being marked for redress, gauging the 2016 budget provision of 500 billion Naira for social inclusion to tackle poverty.

But for some analyst, there is a need for more. Of concern is certainly the challenges of the environment and climate change for women which s one of the critical components and platforms for Beijing  plus 20.

The score card might just call for celebrations to consolidate the gains for women.