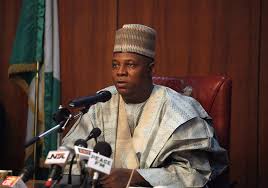 Isa Gusau, Borno State Governor, Kashim Shettima has written to the Inspector General of Police, Solomon Arase requesting for an immediate investigation into the sources campaign posters bearing his picture and that of Imo State Governor, Owelle Rochas Okorocha, aspiring for the 2019 Presidency with Shettima as President.

The Governor said while he wasn’t worried about whatever political objective aimed by those who “fraudulently” produced and pasted the posters in many parts of the FCT and Kaduna on Sunday, but his major concern was his believe that sponsors of the posters had a “wicked agenda” of undermining the current cohesion between the Borno State Government and Buhari led administration “working together in the last one year for the collective goal of ending the Boko Haram insurgency”.

Shettima’s letter clearly alluded to an openly bad relationship between his Government during his first term and the Goodluck Jonathan administration from 2011 to 2015, a situation the Governor’s office, in 2014, attributed to an executed plot by political group which allegedly worked against collaboration between the Shettima Government and the Jonathan administration in fighting the Boko Haram insurgency making the insurgents to grow stronger.

The letter to the IGP with reference number BOSLO/ABJ/14/IV/407 and signed by Permanent Secretary in charge of the Borno Government House and Security, Mr Ahmed Sanda was dated May 29, 2016, dispatched from the Governor’s office.

‎”I have been directed by His Excellency, the Executive of Borno State, Kashim Shettima to bring to the IGP’s notice, dozens of fraudulently produced posters bearing his name and picture claiming he is aspiring for the 2019 Presidency. The posters have been pasted on some routes in Abuja and Kaduna.

2. Governor Kashim Shettima regards this development as a highly mischievous plot that is aimed at destabilizing the emerging peace in Borno State through creation of unnecessary political tension while on the other hand it might aim at creating gap between the Borno State Government and the President Muhammadu Buhari led administration (which just marked it’s first year in office) with a wicked agenda of undermining the current cohesion between the two arms of Government working together in the last one year for the collective goal of ending the Boko Haram insurgency.

3. From a different information we have gathered, the posters are suspected to be the handiwork of a particular group of politicians trying to set the Borno State Government and the APC in the State against the National headquarters of the APC and the Federal Government so as to lay a ground for a plan by the group of politicians to join the APC in Borno State and hijack the party’s machinery.

4. His Excellency, Governor Kashim Shettima has directed me to most respectfully request the following:

i. The Inspector General of Police authorizes an immediate investigation to establish the source of the posters and the purpose for which the plot is meant with appropriate steps taken to arrest and prosecute those behind the posters under relevant provisions of the law.

ii. Any person at all seen pasting the posters in whatever form and on any place in all parts of Nigeria be it private or public should be arrested and prosecuted by the Nigeria Police Force for impersonation and attempts to undermine public peace and other provisions of law.

5. Governor Kashim Shettima finds these posters embarrassing and assures the Inspector General of Police that whoever is seen pasting any of them any where, does so without his prior knowledge and approval.

6. The Governor is of the strong opinion that what is needed in the country now is for all Nigerians and tiers of Government, particularly the Borno State Government, to support and work with the President Muhammadu Buhari Administration in a clearly determined effort to restore peace in Borno State.

7. Governor Shettima feels Nigeria neither needs nor deserves ridiculous and immoral campaign and it’s associated distractions for 2019 elections when the sitting President has just marked his first year in office managing serious challenges inherited from the previous administration” the letter reads.

The letter was received by the IGP’s office on Tuesday and copied to the Director-General of the Department of State Security. It is not clear if any arrest has been made yet.