I am in support of grazing reserves, but only in the North~ Gov Tambuwal 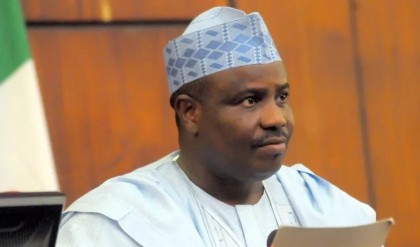 Governor of Sokoto state ,  Aminu Waziri Tambuwal has declared support for  the FG’s planned establishment of grazing reserves. Though his support of the policy is with a caveat, that the grazing reserves  be established only within the northern states of the country.

He said this will enable Fulani herdsmen stay close to their home state and also result to higher yield in terms of quality of milk and meat from the cows.
In his words,   “I am a Fulani from Sokoto and I have cattle. I know that it is better for me to rear and keep my herds in one place and provide good grass for them.
“Talking about the South East and Northern Nigeria re­lationship, this issue of herdsmen that has been coming up re­cently I believe the Federal Government is coming up with a measured response of ensuring that we have grazing reserves, particularly, with em­phasis in Northern Ni­geria, in states where they originate from so that they can remain within their neigh­bourhood, within their families and cater for their cattle in a much more better way, more organised way and more economically vi­able system.
“By having a graz­ing reserve in Sokoto State for instance, all herdsmen and farm­ers in Sokoto can graze within the state with­out moving their herds out.
“We in the northern states in particularly have embraced this very proactive measure of establishing grazing reserves in the North so that the herdsmen and their herds can re­main at home.
That will give us bet­ter meat, quality milk and for the people of Sokoto and Aba leather for making shoes and other leather works,”