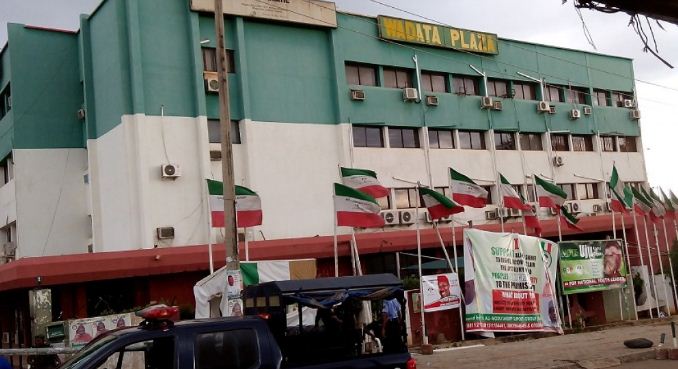 The Inspector General of Police, Solomon Arase, has ordered the sealing of the Peoples Democratic Party secretariat at Wadata Plaza, Abuja.

The Police caaried out the order to avoid clashes between factions of the party’s leadership.

The immediate past chairman of the Party Ali Modu Sheriff, had earlier stormed the Wadata Plaza, the National Secretariat of the opposition party to take over the affairs of the party.

Armed policemen were seen at the entrance of the secretariat on Monday, denying the former leader of the party entrance.

Sheriff was the chairman of the PDP before the party’s national convention held in Port Harcourt on May 21.

Speaking with journalists outside the party’s headquarters, Sheriff said that his mission at the complex was to, “resume officially and takeover,” adding that he was at the Secretariat to resume duty because until the subsisting court cases were dispensed with, he remains the National Chairman.

He therefore stated that it will be the height of self-deceit for anyone to pretend that the PDP is not in crisis.

“But I want to assure you that we have been working round the clock to see how we can resolve the matter without being on the wrong side of the law.

“All the judgments that are available today recognise us as the sole chairman of this party. He added.

Sheriff accused the Inspector General Police of bridging a truce he had with him that nobody should be allowed until until the party has decided.

He said the IGP decided to take the law into his hands and allow the wrong people to gain entrance.

“The law clearly stated that the Inspector General of Police should give us police to go into the office, but he brought platoon of police to block the office.

“We will go back because we do not want some miscreants to take the law into their hands. He said.