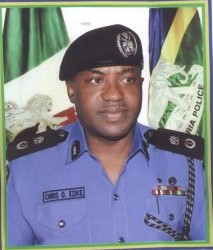 Edo Commissioner of Police, Mr Chris Ezike, on Tuesday warned party leaders in the state that the command would not tolerate political violence ahead of the forthcoming Sept. 10 governorship election.

Ezike gave the warning in an interview with the News Agency of Nigeria (NAN) in Benin, vowing to deal with anyone caught breeding thugs to cause trouble in the state.

“I expect aspirants and party political leaders to know what is good from bad. I expect that they should know that thuggery and political violence are not good ingredients for political growth.

“I am using this medium to warn all the gladiators and stakeholders not to catapult violence to a dangerous level prior to, during, and after the Sept. 10 governorship election in the state.

“It is wrong for a political party to breed thugs and institutionalise it in any guise. The command will fight it and ensure it enforces the law, no matter who is involved,’’ he said.

The commissioner also spoke on the achievements of the police in checking crime in the state.

He told NAN that within eight months of his assumption of office, the command had mopped up 170 arms and 534 kinds of ammunition in the state.

“We also arrested 984 suspected criminals, out of which 890 have been charged to court,’’ he said.

Others are one chief revolver pistol, one English-made double-barrel gun and 34 Improvised Explosive Devices.

He said the command, within the same period under review, mopped up 220 7.62 ammunition and 314 live cartridges.

“These statistics are significant because the relative peace we now enjoy in terms of cultism, kidnapping and armed banditry is attributable to this mop up as they are directly related,’’ the police commissioner said.

He said the command’s improved police-community relationship through responsible communication and mutual interaction strategies was also instrumental to the achievement.

The commissioner said the police would soon inaugurate a state committee in which all Local Government Area Chairmen would liaise with the Divisional Police Officers to further enhance security in the state.

“This is in order to quickly deal with any complaints or friction,’’ he said.(NAN)