Executive And Legislative Arms Are On The Same Page – Minister 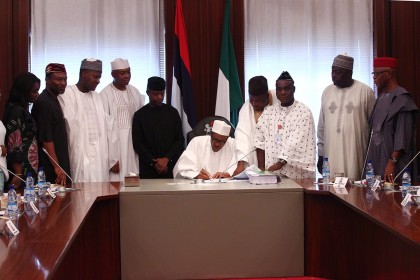 Segun Adeyemi, Abuja: The Minister of Information and Culture, Alhaji Lai Mohammed, says contrary to the belief in certain quarters, the Executive and Legislative Arms of Government are working harmoniously to improve the social and economic well-being of the citizenry.

The Minister made the remarks in Abuja on Wednesday when he received the Senate Committee on Media and Public Affairs, led by its Chairman, Senator Aliyu Sabi Abdullahi, on a courtesy visit to his office.

Alhaji Mohammed restated the commitment of the present administration to ensuring good governance, providing adequate security and revamping the economy in order to deliver the change that Nigerians are yearning for.

“It proves once again that this government, each arm of the government, is working in tandem. They recognize security, the economy and good governance as the sole pillars of any government,” he said.

The Minister said upon assumption of office, he adopted creative and pragmatic approach to bridge the communication gap between the government and the people in order to deepen democracy and inspire trust and confidence among the people.

“We realize the importance of information to the deepening and sustenance of democracy and to that extent, we have evolved means to ensure that there is no communication gap between the government and those that are governed. We put people right in the centre of our communication strategy. We know that the moment that gap exist then you create opportunity for mischief makers, misconception, half truths and downright falsehood,” he said.

Alhaji Mohammed identified town hall meetings as a deliberate strategy adopted by the government to communicate with the people directly to inform them about the policies and programmes of the government and at the same time get feedback on their perception of government.

He disclosed that the government will soon hold a summit on National Rebirth, Values and Ethics during which the National Re-orientation Campaign, tagged Change Begins with Me, will be launched.

In his remarks, Senator Abdullahi said though the challenges confronting the nation are surmountable, there is the need for greater value re-orientation.‎

He sought the collaboration of the Minister in the efforts to promote actions that will bring about positive change in Nigeria. ‎

“As managers of the information and communication space of two critical arms of this democratic government, permit me to note that we need, more than ever before, to proactively work to promote and canvass for the urgent need to ensure genuine and sincere actions anchored on rule of law, due diligence and due process.

”In doing this, we must promote confidence building through genuine co-creation, co-action, co-operation, collaboration and co-ordination,” he said.