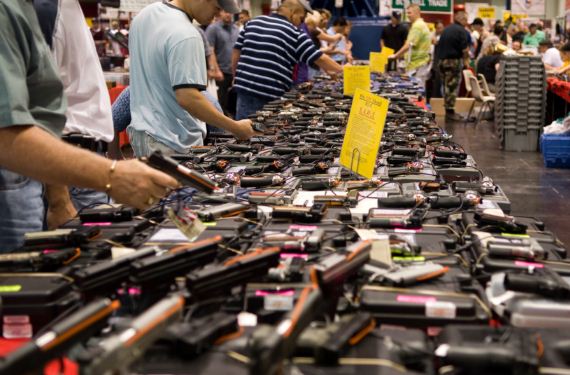 Media report from Washington says that the U.S. Senate has failed to pass any changes to laws regulating gun sales, in spite of calls for immediate action following the worst mass shooting in Orlando.

This bipartisan efforts to tighten gun regulations came in the wake of the Orlando, Florida, shooting on June 12, that claimed 49 lives and left 53 injured.

last week, the Republicans proposed an amendment to a Justice Department spending bill.

The report noted that 60 votes were needed in the Republican-controlled 100-member chamber for each of four proposed amendments to pass.

It said that two of the four amendments, both proposed by Republicans, failed by seven votes.

The report said further that one of the amendments would have created what is known as the “no fly, no buy” rule.

It said that the amendments would have barred gun sales to people who are on the U.S. no fly” terrorist watch list.

It added that another would have closed a loophole allowing gun purchases at gun shows without background checks.

It said the Republican amendment the first by Republicans to restrict gun sales since a recent increase in mass shootings – would have allowed law enforcement to block a firearm sale for national security purposes.

“But progress stalled after Democrats held a 15-hour filibuster, saying the Republican proposal did not go far enough,” the report said.

It said further that the Republicans conceded to allow votes on the other gun sale measures, but they were never expected to pass, even after the successful filibuster.

It said that while the Democrats insisted on pushing for more stringent gun regulations, Republicans called them unconstitutional.

Senate Majority Whip, John Cornyn, of Texas, warned that “Any time you’re denying an American citizen their constitutional rights, it ought to be with evidence, the burden ought to be on the government, and it ought to come from a court.

He also said that bringing up the amendments was simply recycling legislation that Democrats had already tried and failed to pass through the Senate.

Sen. Pat Toomey, a Republican from Pennsylvania, said that the house has already had the vote and it failed overwhelmingly.

“Why aren’t we working on something that could actually get something done.”

Democratic senators, however, argued that Republicans were simply following the wishes of the National Rifle Association (NRA).

Senate Democratic Leader, Harry Reid of Nevada, noticed that it was always the same attitude from the Republicans, after each tragedy.

“Yes after each tragedy we try, we Democrats try to pass sensible gun safety measures, sadly, our efforts are blocked by the Republican Congress who take their marching orders from the NRA.”

While senators on both sides said that there is more gun legislation in the works, there are no proposals that are up for discussion soon.