VP Yemi Osinbajo: The Future Of Nigeria Depends On The Elites 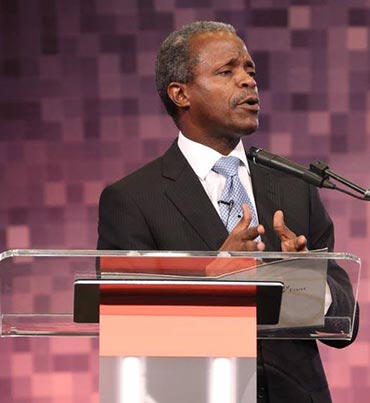 Vice President Yemi Osinbajo, has again harped on the significant role elites play in the development of a country like Nigeria, saying the weight of what happens in the society whether good or bad rests on the shoulders of the elites.

This was stated in press release made available to the press by the Senior Special Assistant-Media & Publicity, to the Vice President, Laolu Akande on Thursday in Abuja.

Prof Osinbajo who spoke to lawyers last night at the Nigeria Bar Association Section on Business Law Dinner submitted that elites like, the lawyers who formed the better part of the audience yesterday, “are the repository for knowledge and information,” and therefore must use their knowledge for the common good of the nation.

The Vice President who had in the past spoken about the need for elite consensus in the country and called for a “new tribe of Nigerians,” to rid the country of corruption, reiterated a similar message of elite responsibility noting that  “whether we accept it or not, the weight of what happens in our society really rests on our shoulders (as elites).

Therefore the society would depend a lot on the elites in the coming years and that is a huge responsibility.”

The event was the 10th Annual Conference of NBA’s Section on Business held at the Transcorp Hilton, Abuja, where Osinbajo, himself a lawyer was Special Guest of Honour.

According to him no country can move forward if the elites have not come to consensus on certain values, adding that “the challenges facing Nigeria is huge yet the elites are yet to come consensus.”

The Vice President stated that “there is no society that has been successful, where the elites don’t have consensus on questions of integrity and morals,” adding that “forging such consensus regarding vital issues is the only way to go, if our society is to grow.”

Stressing the fact that, “we do not have to belong to the same religion or tribe, state or geo-political zones, he reiterated the need to speak about ethics and how to enforce it if we want our country to move forward and be united.”

On the ease of doing business, the VP said the Buhari administration has recently set up a Presidential Ease of Doing Business Council which he chairs, adding that the Council will work to “create an enabling environment for business which, might necessitate removal or relaxation of some of the rules and making more use of electronic applications to shorten the time and be able to say specifically how long getting necessary documents or certificates will take.”

He also noted that “the area of adjudication requires some radical thinking and changes, commercial litigation is the area that feels the pinch the most,” noting that the system is so slow that, it has attracted a lot of negative comments outside the country.

Meanwhile, the Vice President has urged Christians to deal with challenges and conflicts in the body of Christ with due diligence as expected of believers and based on Scripture.

He stated this today during a meeting with a delegation of the Christian Arbitration Centre led by retired Supreme Court Justice James Ogebe, at the Presidential Villa, Abuja.

While expressing his delight at the formation of the centre to resolve conflicts among Christians, the VP told the delegation to seek the buy-ins from trustworthy Christian leaders to support the Centre ahead of its summit in September.

Earlier, the leader of the delegation, Justice Ogebe, said the reason for setting up Christian Arbitration Centre was for Christians to have a place where Christians can come for justice without going to the regular courts for matters that are strictly Christian.

He said it is sad when church matters such as allegations and conflicts are treated at the secular courts.