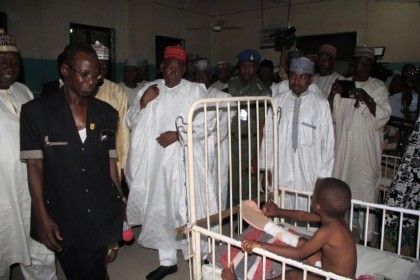 Rabiu Shamma, Kano: Political analyst, you cannot find me praising a particular government easily, I prefer constructive criticism to bring out perceived shortcomings and where to improve, but recently I find some of the criticisms against Governor Abdullahi Umar Ganduje of Kano State unfair, in fact many are illogical. I can see the governor is genuinely concern on making indelible marks in the state.

I recently had the chance to observe governor Ganduje closely when we were invited to interact with the governor as part of delegation with other 24 NGOs in Kano, the governor demonstrated his sterling leadership qualities by showing concern and remarkable interest in the works of the NGOs, the governor sees NGOs as partners in progress not as enemies as some previous governments saw us, he also assured us his door is open for any observation that could better the lives of Kano people, any organisation, he said, can directly write to his office and he will consider any meaningful contribution from any of the NGOs, which is remarkable.

The mistake some people are making is by comparing and expecting different epoch of leadership to have exact style, it is not possible, every government has its style and methods and that of governor Ganduje is not exception. The people of Kano have started to reap the rewards of the impeccable leadership style of Governor Ganduje, despite the challenges; economic and massive debt incurred by the previous administration, I see sincerity of purpose from him, and there is steady progress being made in many sectors like security, education, and infrastructural development around rural and urban areas of Kano.

One of the main qualities of good leadership is to be in synch with your followers, governor Ganduje has shown remarkable good relationship with the people of Kano, he attends weddings, condolences and relates with both young, rich and poor fantastically well which was not the case with the previous governor, who with all due respect was and is still not relating directly with ordinary people of the state except politicians that surrounds him.

Governor Ganduje has written his name in gold as the only governor in the recent history of Kano to have vowed to complete all the uncompleted projects of previous governments in the state, work has so far commenced in many of those projects like many of the immediate past projects abandoned by Kwankwaso; Gadon Kaya Underpass, Murtala Muhammad overhead bridge at Bata, and Five Kilometre Roads in the 44 Local Governments.

Also the administration of Ganduje has continued working on the VVF hospital in Zoo Road and Children hospital in Giginyu respectively that were abandoned by both Shekarau and Kwankwaso governments.

Without a doubt the previous administration of Kwankwaso/Ganduje had recorded remarkable achievements in urban infrastructural development but we cannot say the same in rural development, so it is commendable that governor Ganduje has taken it upon himself to right that wrong, that is why work has commenced in many rural areas in Kano, also there is a program for providing portable water among the rural communities in Kano with many boreholes dug in rural communities.

Also recently the Vice President Professor Yemi Osinbajo was in the state where he inspected, launched and laid the foundation of some projects like Court Road Sabon Gari, Sheikh Jaafar Road Underpass, laid foundation of Skills Acquisition Centre at Gurjiya Town and Building of 2000 low cost housing respectively.

Other ongoing roads projects include; Abdullahi Bayero Road, Dakata-Bela Road, Kundila Road, CBN Quarter, Dandishe to Gobirawa, Gidan Boss Road, Kwairanga Road, Lamido Road, Rano-Kibiya-Sumaila Road, Rumfar Shehu Road and many others too numerous to mention, and you tell me that Ganduje is not working? No it is clear to every discerning mind that only the mischievous could say that.

Governor Ganduje has so far distinguished himself in the whole of Nigeria as far as Agricultural development is concern, in the short period since he came on board, there have been so many achievements in agriculture, the governor has invested so much in that area by sponsoring 100 pastoralists to learn artificial insemination in Turkey, the first of its kind in the state, also the government Ganduje has invested heavily in dry season wheat farming and rice farming in Kura Local Government of the State, the governor said during the flag off that his government will treat agriculture as a top priority and with all the seriousness it deserves, so far modern mechanised tools have been procured by the government, while the minister of agriculture, Chief Audu Ogbeh, has visited Kano many times since he was made minister by President Muhammadu Buhari in November 2015, he was here to flag off or launch one programme on agriculture or the other and the federal government has identified Kano as an important partner in agricultural development and food security in the country.

On the area of Youth empowerment the Governor has shown remarkable interest in youth development, the otherwise delapidated Directorate of Youth Development and Empowerment (DYD) has been revamped, the directorate has so far trained many youths and entered into partnership with many youth organizations to empower youth in the state. At the onset of the Ganduje administration also 250 youth were empowered with ICT and computers and other gadjets were given to the youth to be self reliant. Presently also there are hundreds of youth undergoing training on modern mechanic technology at PAN Nigeria, and the government will build a modern Mechanic Village for the youths.

Women are also not left behind, women are train on driving and get empowered with vehicles in a program tagged Kal-Kal, they are to be used in keeping our houses clean and be paid a token which will help them to be self reliant, it is an initiative that was never seen before anywhere in Nigeria, it is under the state’s ministry of women affairs. There are also other numerous programs for our mothers benefit under the government of governor Abdullahi Ganduje like the recent massive empowerment start-up granted to women from the 44 local governmentsIn conclusion, there are numerous projects churn out daily by the Ganduje administration, the governor needs all the support and prayers, I also call on the amiable governor not to get distracted, he must continue to be strong and forthright, I believe he knows what he wants to achieve, and as he said if anyone has any complain on anything about the government, there are ways to do that, not through insults for selfish and political reasons. Truly govenor Ganduje is here to work.