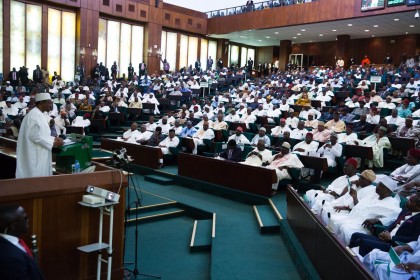 Femi Adesina, Abuja: Since the appointment of Femi Adesina as Special Adviser to the President on Media and Publicity, he has applied himself to the job, making frantic efforts to defend the administrative policies of President Muhammadu Buhari’s government. In this exclusive interview with Independent correspondent in the Aso Villa, INNOCENT OWEH, he dismissed allegations by the national assembly leadership that the Presidency was behind its many travails. He also spoke on why the immediate past administration of President Goodluck Jonathan abandoned several Memorandum of Understandings (MOUs) signed with foreign allies, which could have translated to more development for the country.

With the gloomy economy, workers are becoming tensed, and recently staff of the Federal Ministry of Finance protested over poor welfare issues, are you aware of their grievances?
I read the explanation from the finance ministry that what they are agitating for had been stopped by the previous government, that explains it. If there would be further explanations, I think its the ministry of finance that would do it, but I think what they have said satisfies me, it suffices for now
What would you say is the policy direction of this administration, especially on the economy?

It is that Nigerians need to look inward, all the luxuries that we can’t afford have to be cut off and that is simply what this government wants to do. There are 41 items under forex ban now, that already shows you the direction this administration is going.

Whatever we cannot afford and we can do without let’s cut it off. Why do we expend scarce foreign exchange on rice, cement, toothpick or tomato puree; on things that we can produce locally, so that already shows the direction the government wants to take the economy.

Not only do you have fuel prices coming down, it shows you that by the time the thing is in full stream, there is going to be competition in terms of prices and people will buy where they like and that very process itself would force down prices.
The executive have come under criticism from the national assembly as being behind its travails, what is your take on this allegation?

They are purely independent bodies, they just relate within the ambit of the law and constitution and I have no cause to believe that there is anything wrong with the relationship.
The 2016 budget is undergoing implementation, should Nigerians still maintain high optimism that they had at the inception of this administration?

Optimism is part of life, optimism keeps us going. By the time we lose optimism, we have lost everything. So, I expect that we continue to be optimistic. As clear as day follows the night, things will get better in Nigeria.

Buhari has obviously made his mark in tackling terrorism but Nigerians would like to know what gave him the impetus to deliver in a short time?

You know the President himself is a retired General, so he knows what to do. He changed the leadership of the military, he arranged for retraining, arranged for re-equipping, he arranged moral booster for them and everything working together for good has led us to where we are now.

But challenges of IDPs have cropped up as a result of terrorism, how would the Federal Government address that issue as well?

You know that there are groups and agencies working with the Federal Government on that. There is also the Danjuma Committee set up to ensure that their plight is attended to. There are international organisations working in concert with the Federal Government on that, all I want you to know is yes, the issues of IDPs are being tackled. It is a major issue that is being attended to.

How far about the MoUs signed by President Muhammadu Buhari on his recent trip to China, has it been rested?

We came back from China with potential investments in excess of about $6billion dollars and it is work in progress now because it’s a process, we have signed the Memorandum of Understandings and we must come up with counterpart funding, which was what the Jonathan administration did not do; they signed most of the MoUs but they didn’t do their own part of funding. This government, despite the paucity of funds, will do its part.
We have heard that the railway transport programme resuscitated by the immediate past administration will come on stream by July, can you throw more enlightenment on that?

Yes, the Ministry of Transport is in a better position to tell you but I am aware because I have heard the Minister of Transport, Rotimi Amaechi saying that it will come on stream soon, so its a good development. Nigeria is making progress. That shows you the benefits of continuing with the policies and projects of the previous government because that was a project inherited and it was taken forward. A petty government could have come and discontinued it, no it was taken forward and we are in the verge of launching it. It shows you that government must always be large-hearted, broad minded enough to continue the good things it inherited.

You have been with the President as one of his media aides in the last one year, how would you describe your experience so far?