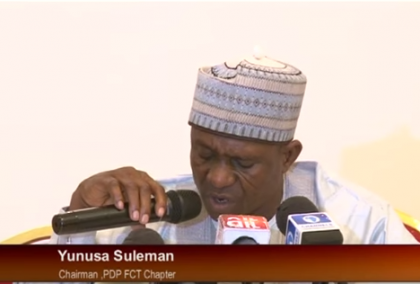 About 24 PDP state chairmen has throne their weight behind the PDP National caretaker committee led by Senator Ahmed Makarfi.

Leading the state chairmen on the solidarity visit, the FCT chairman of the PDP, Yunusa Suleiman said they are concerned about the happenings in the party.

In his speech, FCT chairman of PDP appealed to Senator Ali Modu Sheriff to sheath his sword and accept the decisions of the Port Harcourt convention.

In his words;
“While we appreciate the enormous services and contributions of Senator Ali Modu
Sheriff during his tenure in office, we wish to appeal to him to accept the decisions of the Port Harcourt convention, believing that other opportunities may arise in the future for him to serve the
party  in other capacities.”

Senator Ahmed Muhammed Makarfi described the leadership crisis in PDP as sign that PDP is still strong.  He however said that this should not be taken too  long because of its repercussion

In a related development,  the caretaker committee has received the report of recent primary elections of the PDP in Edo state from Governor Dave Umahi of Ebonyi state.