Nyesom Wike, Amaechi And Others Meet To Ensure Peace In Rivers 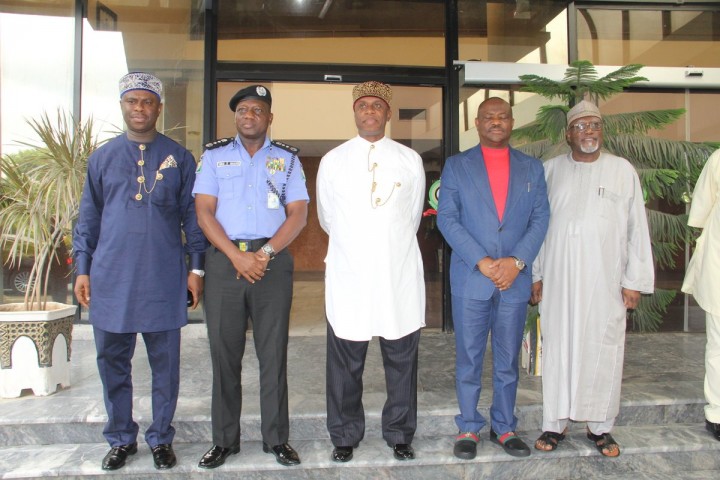 DCP Don Awunah, Abuja. In a concerted effort to guarantee a violent-free and credible Re-run Senatorial/House of Representative elections in Rivers State, a crucial meeting to chart the path to peace in Rivers State before, during and after the Re-run elections in the State was held today, 26th July, 2016 between the Inspector-General of Police, Ag.IGP Ibrahim K. Idris and the Director-General of Department of State Services, Alh. Musa Daura.

The two major players in the politic of Rivers State, His Excellency, Barr. Nyesom Wike, the Governor of Rivers State and the Hon. Minister of Transport, Rt. Hon Rotimi Amaechi were in attendance.

2. The meeting deliberated on the overall need to have peaceful, free and fair election devoid of violence which was the hallmark of the previous elections in the State.

The Governor, His Excellency, Barr. Nyesom Wike and Minister, Rt. Hon Rotimi Amaechi resolved to be irrevocably committed to lasting peace and vouched to play the game by the rules in the forthcoming re-run elections in the State. They also agreed to prevail on their teaming supporters to adhere to their commitment to peace and security in the State.

3. In addition, the two major stakeholders agreed to convene another meeting in Port Harcourt, Rivers State aimed at further solidifying the commitment to peace reached in the meeting, which is a prelude to the roadmap that will usher a permanent and lasting peace in Rivers State.

The meeting was held in an atmosphere of mutual respect and cordiality.

It would be recalled the Independent National Electoral Commission postponed the Rivers State National Assembly election earlier scheduled for Saturday the July 30th of this month.