The Real IBB In Nigeria And Politics 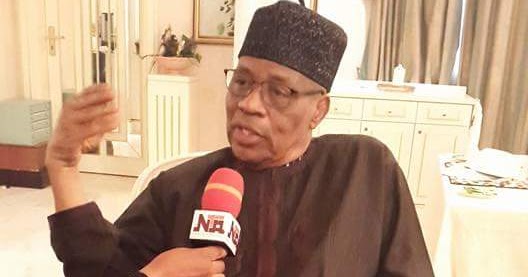 Yusuph Olaniyonu, Abuja: Senate President, Dr. Abubakar Bukola Saraki on Wednesday described former Military President, General Ibrahim Badamasi Babangida, as one of the issues that continue to define the Nigerian polity, even at the age of 75 and 23 years after he left office.

In a statement by his Special Adviser on Media and Publicity, Yusuph Olaniyonu, in Abuja, Saraki stated that the contributions of Babangida to the socio-economic development of the country remains legendary and are obvious across the landscape.

“From the political engineering that his administration introduced into the country which encouraged many young people, particularly, professionals, those in the private sector and Nigerians in the diaspora, to join politics, to the two-party system which sought to eliminate ethnicity in politics and encourage manageable political platforms with national spread, the foot-prints of General Babangida remain visible everywhere.

“As a war hero who also participated in most of the military administrations that we had since independence and then transformed to a man who played a major role in the return of democracy in 1999 and the emergence of the first post-1999 Presidency for the purpose of forging national unity and healing past wounds, General Babangida remains a statesman and a visible decimal in the making of today’s Nigeria”, Saraki stated.

He added that Babangida will also be remembered by history as the one whose administration helped to realise the dreams of the Murtala/Obasanjo regime in moving the nation’s capital to Abuja.

“General Babangida remains a fascinating figure to me in his ability to build bridges across the country. His name continues to evoke support across the country among his numerous supporters while those who also do not like the policies of his government remain vociferous in their opposition to him. That I think is the stuff that a great leader is made of and that is why I apply an earlier phrase he used to describe one of our late nationalists on him too that ‘he remains one of the issues in Nigerian politics”, the Senate President stated.

He prayed to Almighty God to preserve the General in good health and for many more years in other to enable him continue in the service of humanity in general and Nigerians in particular.