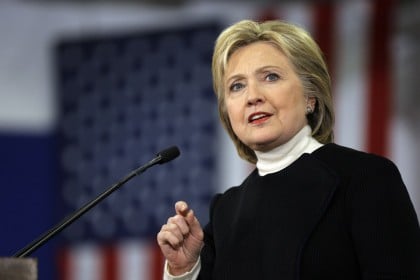 Hillary Clinton’s probability of winning the White House gained in online betting markets following the first debate of the campaign on Monday night between her and Republican Donald Trump.

In a CNN/ORC poll Clinton won the debate 62 per cent  to Trump’s 27 per cent.

NAN report that Clinton contract on the popular Predict It betting market gained 6 cents from the previous day’s level to 69 cents, while a contract favoring Donald Trump’s prospects for victory tumbled 7 cents to 31 cents. Contracts are priced from 0 cents to 100 cents, with the contract price equating to a probability of whether that candidate will win the Nov. 8 election.

The price swings for both candidates were the largest since early August, and placed Clinton’s lead in that market at the widest in about two weeks.

About halfway through Monday’s debate, she was shown as a 1-to-2 favorite, and those odds shortened to 4-to-9 in the moments after the debate ended. Trump’s odds lengthened to 23-to-10 from 9-to-4.

The swing following the debate put the brakes on a big Trump price rally on PredictIt that coincided with a tightening in most public opinion polls. The implied probability of him winning had risen to 38 cents on Sunday from just 28 cents at the end of August.

Bets on Trump fell as low as 5 cents on February but went up as high as 44 cents in May. Bets on Clinton, the persistent favorite in most wagering markets, went as low as 37 cents in January and as high as 79 cents in August.

The debate on Monday was the first of three scheduled face-offs between the two candidates before the Nov. 8 election