Putin Slammed In US #VPDebates 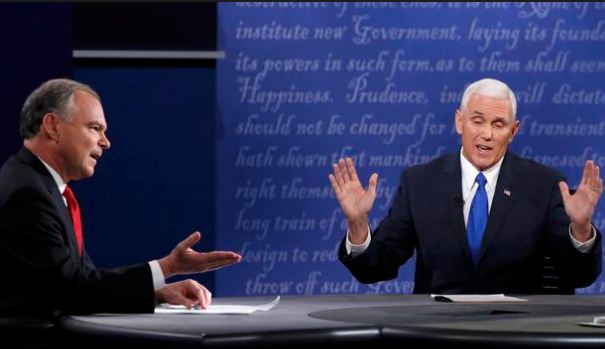 Pence’s denunciation of Putin for his interference in the Syrian civil war and support for Syrian President Bashar al-Assad was a departure from the frequent praise of Putin by Trump, the Republican presidential nominee, who has called him a better leader than U.S. President Barack Obama and said he could work with him.

“The small and bullying leader of Russia is now dictating terms to the United States,” Pence said. “The greatest nation on earth just withdraws from talks about a ceasefire, while Vladimir Putin puts a missile defence system in Syria.”

The encounter between Pence and Kaine, who is No. 2 to Democratic presidential nominee Hillary Clinton, was the only such debate between the vice presidential contenders before the Nov. 8 election, and the two spent most of their time attacking each other’s running mates.

For more than 90 minutes at Longwood University in Farmville, Virginia, neither Pence nor Kaine appeared to deliver a knockout punch. Pence sought to project an image as a reassuring presence to the bombastic Trump, while Kaine tried to frighten voters away from Trump and make Clinton seem more trustworthy.

It set the table for a second presidential debate looming on Sunday in St. Louis between Clinton and Trump, who needs to rebound from a rocky performance from his first debate, one that gave Clinton a boost in national opinion polls with Election Day only five weeks away.

Pence’s comments raised eyebrows among establishment Republicans as to whether the governor of Indiana was breaking ranks with Trump on Russia. Trump himself earlier in the day condemned Russian bombing in Syria after the United States withdrew from ceasefire talks with Russia.

Conservatives who do not support Trump liked Pence’s view.

Pence said “the provocations by Russia need to be met with American strength” and that if Russia chooses to continue to be involved in “barbaric” attacks on civilians, “the United States of America should be prepared to use military force to strike military targets of the Assad regime.”

Pence’s blunt comments on Russia, more in line with thinking by traditional Republicans, came in response to Kaine’s charge that Trump was too cosy with the Russian leader.

Kaine, a U.S. senator from Virginia, said Clinton would be tough in dealing with Putin.

“Donald Trump, again and again, has praised Vladimir Putin. And it’s clear that he has business dealings with Russian oligarchs who are very connected to Putin,” Kaine said.

Democrats were quick to point out the discrepancy between Trump and his running mate on Russia.

“All of a sudden we hear tough talk about Vladimir Putin. It’s the exact opposite of what Donald Trump has been saying,” said Clinton campaign manager Robby Mook.

Pence’s toughened position on Russia gave him an opening to declare that Clinton had been outfoxed when she attempted a U.S. reset in relations with Russia when she was Obama’s secretary of state from 2009 to 2013.

Bickering between Kaine and Pence was so intense that they frequently talked over each other. Kaine was seen by television commentators as being overprepared and overeager as he circled back to Trump’s refusal to release his tax records at almost every opportunity.

Kaine called the Republican presidential nominee a danger to U.S. national security and someone who denigrates women and minorities and appears to pay little in federal taxes.

Kaine drew Pence’s ire by hearkening back to a remark from former Republican President Ronald Reagan that some fool or maniac with a nuclear weapon could trigger a catastrophic event.

“And I think that’s who Governor Pence’s running mate is,” Kaine said.

Pence shot back: “Senator, senator, that was even beneath you and Hillary Clinton and that’s pretty low.”

One of Kaine’s most aggressive lines of attack was over Trump’s refusal to release his tax records, a decision that breaks with the practice of all other presidential nominees in modern history.

The New York Times reported last weekend that Trump had taken a $916 million tax loss in 1995 and may have avoided paying federal taxes for 18 years because of it.

Pence defended Trump, saying the New York real estate developer had created thousands of jobs and had used U.S. tax laws as they were designed to be used.

“Why won’t he release his taxes?” Kaine fired back.