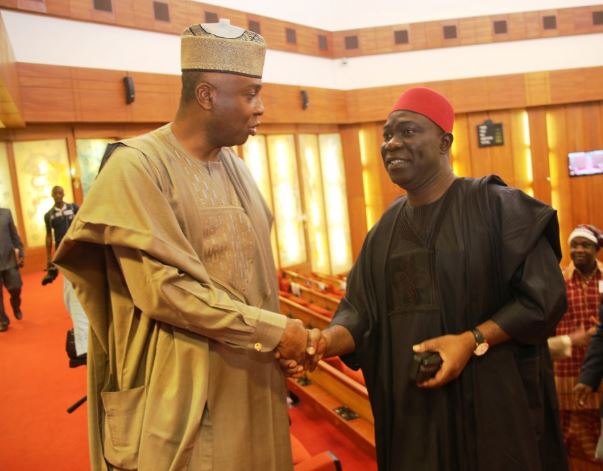 The Federal Government on Friday, withdrew the forgery charges against President of the Senate, Senator Bukola Saraki and his deputy, Senator Ike Ekweremadu before the FCT High Court in Abuja.

The Deputy Senate President, Ekweremadu described the development as a “Victory to Democracy” He stated this in a statement issued by him on Friday in Abuja.

“Today, the Federal Government of Nigeria withdrew the charges of forgery and conspiracy it preferred against me and the President of the Senate, His Excellency, Distinguished Senator Bukola Saraki, before the Federal Capital Territory (FCT) High Court, Abuja.

“We presented ourselves before the Honourable Court on June 27, 2016, and pleaded NOT GUILTY to the charges. I clearly recall stating on that day, my great comfort in the immortal words of late Dr. Nnamdi Azikiwe, that history will vindicate the just.

“Today, time has indeed vindicated the just and it is victory for democracy. This day, my trust in God, the court, and the overwhelming solidarity of the good people of Nigeria is justified.” He said.

He thanked Nigerians, his colleagues in the Senate, Members of the House of Representatives and all who stood stoutly in defence of democracy and its blessings, while the trial lasted.

“I deeply appreciate members of the international community, especially the Parliament of the United Kingdom, Parliament of the European Union, and the Inter-Parliamentary Union for their solidarity messages.” He added.

According to him, this triumph of democracy shows that government must put behind politics and that all should join hands in governance, especially now that the country is challenged on different fronts.

“As a Christian, I have forgiven all those behind this, for, ultimately, God is the driver of the destinies of men. I believe that, going forward, we must also learn to be just to all in accordance with our Oath of Office.” He added.