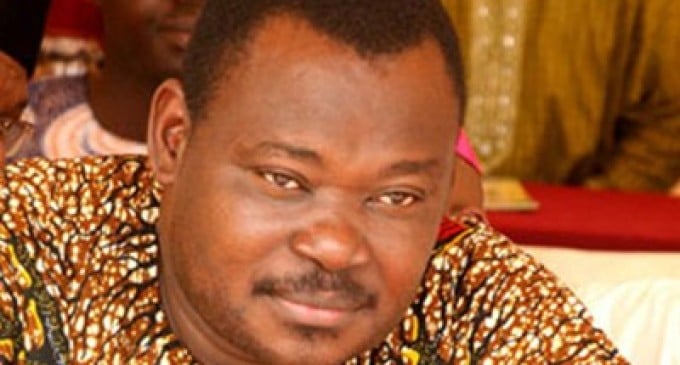 A statement from Prince Adedeji Soyebi, National Commissioner, INEC on Monday 24th October in Response to Jimoh Ibrahim Bribery Claims: The Independent National Electoral Commission’s (INEC) attention has been drawn to several newspaper reports published on Monday October 24, 2016, in which Mr Jimoh Ibrahim alleged that the Commission’s Acting Director, Legal Services Mrs Toyin Babalola asked for $1 million bribes from him, before the order made by Justice Okon Abang of the Federal High Court, Abuja Division could be complied with by the Commission. He also accused the Commission’s Resident Electoral Commissioner(REC) for Ondo State, Mr Segun Agbaje of some “dirty deals.”

According to a front-page report by the National Mirror of October 24, 2016, a newspaper in which Mr Ibrahim has substantial interests, Mrs Babalola was alleged to have said: “I should bring US $1 million before she can do her job. She insisted that she will not obey the court order and if I don’t pay, she will not do it unless we bring another court order.”

In the same report, Mr Ibrahim also alleged that the Ondo REC “requested to hold a meeting with him(Ibrahim) in London, in the United Kingdom.” 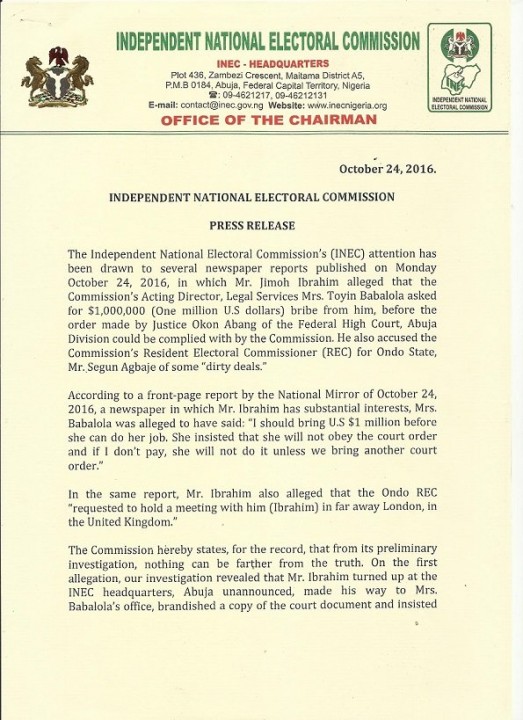 INEC Response To Jimoh Ibrahim(Part A)

The Commission hereby states, for the record, that from its preliminary investigation, nothing can be farther from the truth. On the first allegation, our investigation revealed that Mr Ibrahim turned up the INEC headquarters, Abuja unannounced, made his way to Mrs Babalola’s office, brandished a copy of the court document and insisted that INEC should accept him as the official candidate of the PDP for the Ondo Governorship Poll.

On sighting the unexpected guest, Mrs Babalola called three other lawyers in her department to witness her encounter with Mr Ibrahim and politely told him that the Commission was already in possession of the court document. At no time during the encounter that lastest less than 15 minutes did Mrs Babalola ask for $1 million dollars. Therefore, the allegation by Mr Ibrahim is false.

It should be noted that court orders/judgments are served by court bailiffs and not individual parties. Furthermore, INEC only receives nomination papers from the national chairmen of political parties or their designated officials and not aspirants. 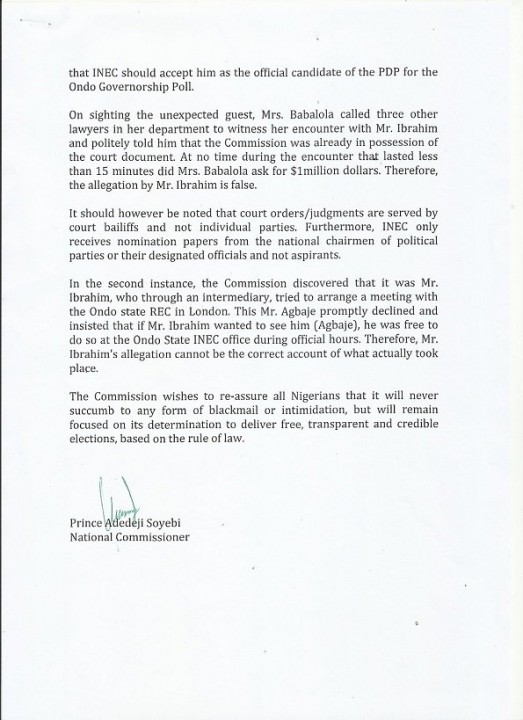 INEC Response To Jimoh Ibrahim(Part B)

In the second instance, the Commission discovered that it was Mr Ibrahim, who through an intermediary, tried to arrange a meeting with the Ondo state REC in London. This Mr. Agbaje promptly declined and insisted that if Mr Jimoh Ibrahim wanted to see him(Agbaje), he was free to do so at the Ondo State INEC office during official hours. Therefore, Mr Ibrahim’s allegation cannot be the correct account of what actually took place.

The Commission wishes to reassure all Nigerians that it will never succumb to any form of blackmail or intimidation, but will remain focused on its determination to deliver free, transparent and credible elections, based on the rule of law.