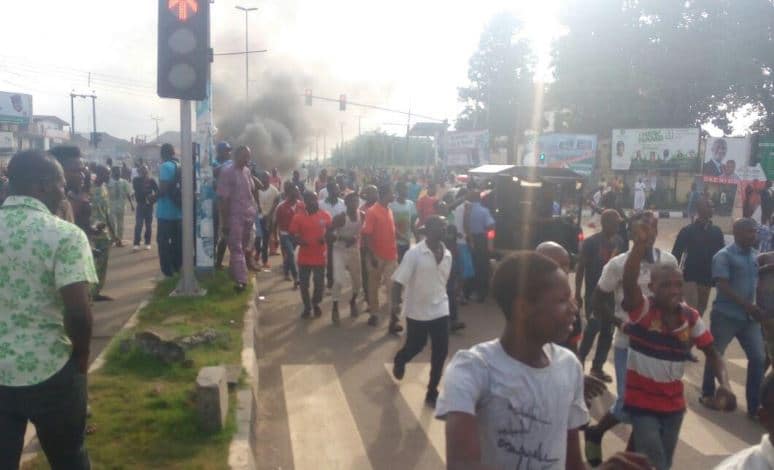 Governor  Olusegun Mimiko of Ondo State has made a passionate appeal to President Muhammadu Buhari  to wade into what he called the potentially dangerous  political crises in the Sunshine State.

The Governor  who met the President behind closed doors  at the Presidential Villa in Abuja described as shocking and disturbing the replacement of Eyitayo Jegede with Jimoh Ibrahim  as PDP candidate for the forthcoming Governorship election in the state by INEC.

Akure is near boiling point this morning as residents took to the street to protest the removal of the name of the governorship candidate of the PDP, Eyitayo Jegede SAN from the final list of INEC.

Jimoh Ibrahim had to shelve his plan visit to the state for fear of not being welcomed in wake of the protest and violence.

The Ondo State Government has since appealed for calm and peace over the conflicting pronouncements emanating from the Courts and INEC on the gubernatorial candidates in respect of the forthcoming elections scheduled for 26th November 2016.

On Thursday 27th October 2016, The Independent National Electoral Commission(INEC) in Abuja confirmed the Businessman and Philanthropist Mr. Jimoh Ibrahim as the candidate of the Peoples Democratic Party for the governorship election in Ondo State.

Prior to his confirmation, Mr. Jimoh Ibrahim brought up a bribery allegation against the Commission, which was swiftly refuted.

“The Commission hereby states, for the record, that from its preliminary investigation, nothing can be farther from the truth. On the first allegation, our investigation revealed that Mr. Ibrahim turned up the INEC headquarters, Abuja unannounced, made his way to Mrs. Babalola’s office, brandished a copy of the court document and insisted that INEC should accept him as the official candidate of the PDP for the Ondo Governorship Poll.

“On sighting the unexpected guest, Mrs. Babalola called three other lawyers in her department to witness her encounter with Mr. Ibrahim and politely told him that the Commission was already in possession of the court document. At no time during the encounter that lastest less than 15 minutes did

“At no time during the encounter that lastest less than 15 minutes did Mrs Babalola ask for $1 million dollars. Therefore, the allegation by Mr Ibrahim is false.” The statement said.