Osinbajo’s Message Of The New Tribe Of Nigerians 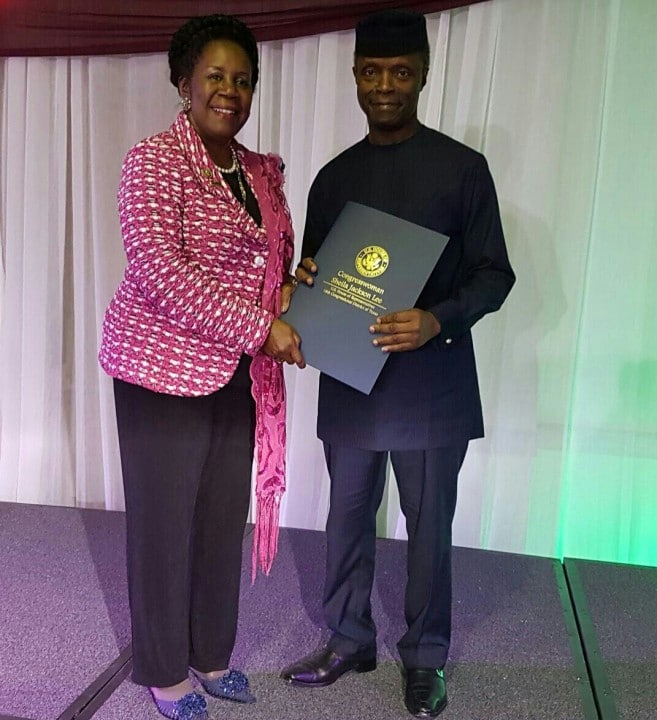 Vice President, Prof Yemi Osinbajo, has reiterated his call on Nigerian elites to come together based on a common consensus to build the nation as Nigerians clearly desire good governance.

This was according to a statement by Senior Special Assistant on Media & Publicity, in the Office of the Vice President, Laolu Akande.

Speaking at the gala/ dinner event organized by the Christian Association of Nigerian-Americans, CANAN in Houston, USA on Friday night, the Vice President noted that, “ even in the midst of all the country is going through, there is a growing consensus by all and sundry on the need for good governance.”

At the event attended by leaders of the Nigerian community in the US and American political leaders including US Congress Woman Sheila Jackson Lee, the Vice President was presented an honorary US Congressional Proclamation to commemorate his visit to Texas and also honor the Buhari presidency.

Explaining the need for a group of Nigerians who are committed to lifting the nation to rise up, Prof Osinbajo noted that this was important to counter and stop those who are working to pillage the resources of the country.

“This is why the president and myself have made a call that we need a New Tribe of Nigerians. We do need a new tribe of men and women of all faiths, tribes and ethnicities, who are commited to a country run on high values of integrity, hard-work, justice and love for the country,” he said.

Continuing he said “I mean a tribe of men and women who are prepared to make the sacrifices and self-constraints that are crucial to building a strong society; who are prepared to stick together, fight corruption side by side, and insist on justice.”

Prof. Osinbajo pointed out that the current administration takes diaspora issue very seriously, a reason, according to him that the President appointed a Senior Special Assistant on Diaspora in person of former House of Representative member, Mrs. Abike Daibiri.

Highlighting the importance further, the VP also pointed at the proposal for a Diaspora Commission, and a diaspora bond worth N1 trillion for investment purpose by both Nigerians at home and abroad.

Osinbajo commended CANAN for its accomplishments during its short existence. He listed some of CANAN’s achievements to include being in forefront of the quest to designate Boko Haram as a Foreign Terrorist Organization, FTO, by the US and also donating $50,000.00 in 2013 to Boko Haram victims, stating that these are a demonstration of patriotism by members of the association even while outside the shores of the country.

Speaking earlier,the President of CANAN, Dr. James Fadel urged Nigerians to engage in prophetic prayers in order to take the country out of its current predicament.

Nigerians, Dr. Fadel said, must reject the tendency to be a consuming nation without the desire to also produce, adding that what is needed now is for all and sundry to build trust in God to win the battle against the nation’s opposing forces.

At the event, the Vice President was presented with an honorary congressional proclamation by US Congress woman Sheila Jackson-Lee, who indicated that the US Congress takes Nigeria as a very serious partner, a reason it has given great support to the ongoing fight against Boko Haram.

She disclosed that it is on record that, Nigeria is one of the countries that has its own Caucus among the elected representative in the US Congress, made up of both Democrats and Republicans.

ALSO READ: How FG Is Promoting Manufacuring And Local Production In Nigeria ~ Osinbajo

Some Nigerians were honored at the gala night for their achievements in various areas of human endeavors in the US, including Dr. Oluyinka Olutoye, the US-based Nigerian doctor who recently operated on a pregnant American mother who had a tumor growth. Olutoye removed the fetus, operated on the tumor, and returned the fetus. The pregnant woman then completed the pregnancy term and delivered the baby safely.

Vice President Osinbajo presented the laurels to all the high-flying US based Nigerians honored at the event.