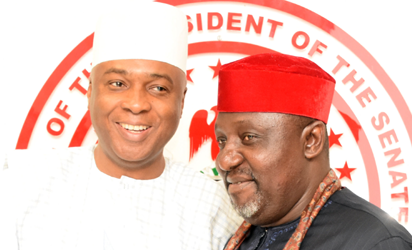 Worried by the cold relationship between the executive arm of government, the National Assembly and the party, Chairman of the All Progressive Congress (APC) Governors’ Forum, Owelle Rochas Okorocha of Imo state yesterday visited the Senate President, Dr. Abubakar Bukola Saraki where he preached unity within the party.

Though, Governor Okorocha said that his visit to the Senate was belated, nonetheless, “it is never late to make amend where possible”.

According to Okorocha who told Saraki that he was visiting in his capacity as the chairman of the APC Governors’ Forum, said, ” This is the very first time I am coming to your office and I am here because I am concerned.
“I am here because I am a stakeholder. I am here as the Chairman of the Progressives Governors’ Forum – your friends and colleagues in the struggle. Mr. Senate President, leaders of these great Senate, you may recall a few years ago that we were all in the trenches, in battle, asking for change in the Federal Republic of Nigeria. I recall vividly the role most of you played in that very struggle.

“We became a government when no one gave us a chance to be so. And shortly, Nigerians believed in us and entrusted us with the responsibility of leading this nation. But one year and several months after, we have not been able to manage this God-given victory very well and it is very worrisome, Mr. Senate  President.

“That Nigerians expects so much from us but yet we seem to be in crisis within ourselves. Not crisis made by the opposition parties but crisis created by ourselves for ourselves and which has kept us in total difficult position that we are not making the headway we need to make as a party.

“One wonders then what went wrong. Where did we get it wrong? And after these troubles and after the much hope we have given to Nigerians, we still cannot work together as a party, as a family. And I noticed particularly that there is so much bitterness in the system – from the party, from the legislature, from the executive, from the governors – and it seems to me like there is no more platform for us to chant those old songs which we used to sing in the days of struggle for change. One wonders, was this what we were asking for or was this the change we were asking for. I think Nigerians expect so much from us and at the end of it all.

“Nigerians will not ask us, how many of each other we have been able to destroy or how many we have been able to bring down. But they will ask us how many plates of food have we put on the table of the common man who elected us. So, I am here Mr. President of the Senate to call for unity among us and our party. And to sheath our sword in whatever form anger has gotten to us.

“We noticed and we know that we are a party in majority at the National Assembly and we are a party with majority in the number of governors – state houses of assembly – but we notice there is no cordial relationship between the Governors, the Executive and the legislature.

“And let me reemphasize that in all these arms of government, it is only the legislature with the executive that are the elected members. Not the Judiciary. And Nigerians will hold us responsible as the executive and legislative arms of government. So, we must act quickly to ensure peace reigns among us. I have discussed with the party – that was my first point of call – to seek what we must do to forge a way forward.

“Governor Okorocha recently met with the President all in a bid to move this party forward and bring about unity. Today, I am before you, the Senate President, number three citizen of this country and I ask you to use your wisdom to bring peace among our party. We need to enjoy that very vibrancy for which the National Assembly has been known for. We need to enjoy those things that PDP used to enjoy when they were a majority in the National Assembly.

“The APC government must see you as majority in the National Assembly not minority in the house. My Senate President, my Senate President, my Senate President, to whom much is given, much is expected and two wrongs can never make a right. It takes one arm of a relationship to make good the other. I liken my situation to what I see in my own government that it is difficult to succeed as an executive if you do not have the proper support of the legislature.
“I will appeal that we make amends where possible to ensure smooth running of the government of the Federal Republic of Nigeria. And we intend again, to hold a meeting between the executive, the legislature and the governors and the presidency as soon as possible. I may suggest that His Excellency, President Muhammadu Buhari, has also agreed to address the leadership of our party very soon. But before then, I think all the rough edges must be smoothened.

“So we can truly tell the world that we are the government  in power – our government is in the majority. Again, I want to thank you for the time taken to receive me and pray that this very visit would mark a new beginning in our relationship. Thank you”, the Imo State Governor said.

In his response, the Senate President told the Chairman of APC Governors’ Forum that he has raised vital issues that the APC National Assembly caucus would look into, while assuring the Governor that the Senate will work in synergy to deliver the dividends of democracy to Nigerians that voted the APC into power.

Dr. Saraki admitted that the crisis in the party is surmountable, saying nonetheless that the doors of National Assembly is open to the party as he noted that it remains a surprise that the leadership of the APC has not deemed it fit in the last 16 months to visit and meet with their members in the National Assembly.

He maintained that with synergy between the party, the executive and legislature, the interest of the common man would be maintained.

The Senate President told the Chairman of APC Governors’ Forum that the Senate is already working to complement the executive arm in churning out laws that will help turn around the economy.

“Today in the senate plenary, the Petroleum Industry Bill (PIB) has passed its second reading while other economic reform laws has been passed into law.

He also told Governor Okorocha that the Senate has passed a resolution on the 21-Point Economic plan to bring the country’s economy out of  recession.

Dr. Saraki who was joined by Senate leader, Ali Ndume, Senators Fino Melaye, Rafiu Ibrahim, Hama Isa Misau and Aliyu Sabi Abdullahi in receiving Okorocha further said that the APC caucus in the Senate is working with their colleagues in the other parties to ensure that issues of security, economic development and corruption are concentrated upon in the remaining tenure of the current Senate.