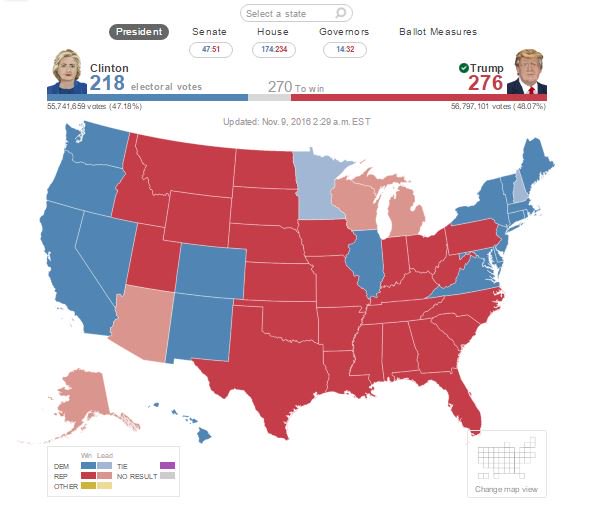 #BREAKING: Donald Trump Elected As The 45th President of The United States

Republican candidate has won the 270 electoral college votes and he is the President-elect of the Untie State of America.

Republican Donald Trump moved to the brink of winning the White House early on Wednesday, sweeping a series of key battleground states and rattling world markets that had expected Democrat Hillary Clinton to defeat the political outsider.

Trump appeared headed toward a stunning upset of Clinton in a bitter and divisive White House race after capturing Ohio, Florida and other big states, edging closer to slamming the door shut on her quest to become the first woman president.

Republican Donald Trump stunned the world on Tuesday by defeating heavily favored Hillary Clinton in the race for the White House, ending eight years of Democratic rule and sending the United States on a new, uncertain path.

Donald John Trump was born on June 14, 1946, is an American businessman, television producer, and politician. The Republican Party’s nominee for president in the 2016 election, he defeated Hillary Clinton in the general election on November 8, 2016.

scheduled to take office as the 45th President under the 20th amendment on January 20, 2017; he holds the distinction as the oldest man ever elected to the presidency.