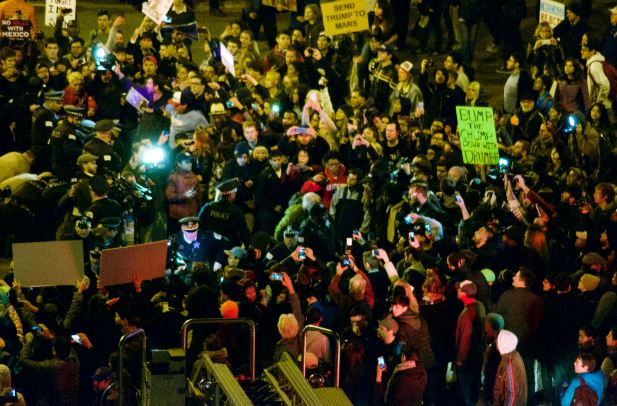 At least eight cities have witnessed protests following the victory of Donald Trump over the Democrat’s Presidential candidate, Hillary Clinton in Tuesday’s US election. Protesters have raised concerns over Trump’s policies that would violet Americans’ civil rights.

The President-elect on Friday praised they protesters for being passionate about their country just hours after he accused them of being “professional protesters” incited by the media.

“Love the fact that the small groups of protesters last night have passion for our great country. We will all come together and be proud!” Trump tweeted early on Friday.

BBC reports say about 4,000 demonstrators gathered in the centre of the western city. Some smashed shop and car windows, threw firecrackers and set rubbish alight.

Police declared a riot and made 26 arrests. Oregon voted in favour of Hillary Clinton in Tuesday’s election.

Trump’s critics worry that his often-inflammatory campaign rhetoric about immigrants, Muslims, women and others – combined with support from the Ku Klux Klan and other white supremacists – could spark a wave of intolerance against minorities.

East Coast protests took place on Thursday in Washington, Baltimore, Philadelphia and New York, while on the West Coast, demonstrators rallied in Los Angeles, San Francisco and Oakland in California, and Portland, Oregon.

According to Reuters, after Clinton conceded defeat early on Wednesday, Trump took a far more conciliatory tone than he had often displayed during his campaign, promising to be a president for all Americans. His campaign rejected a Klan newspaper endorsement days before the election, saying Trump “denounces hate in any form.”

But civil rights groups and police reported an uptick in attacks on minority groups, some by people claiming to support Trump.

The President elect also tweeted that Friday would be “busy”, and he would “soon be making some very important decisions on the people who will be running our government”.

Busy day planned in New York. Will soon be making some very important decisions on the people who will be running our government!