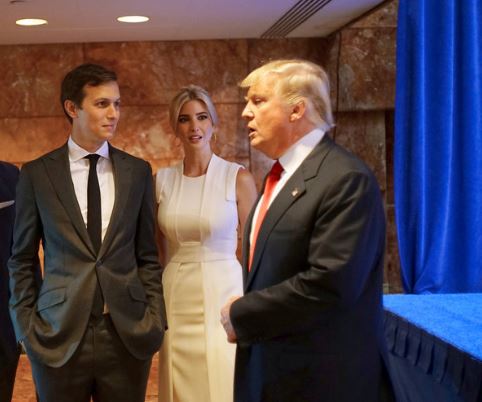 President Elect Donald Trump, has praised his so-in-law Jared Kushner in his entire role played in the Campaign towards the Trump Presidency.

After winning a primary election that effectively clinched the Republican presidential nomination, Donald Trump paused to laud a boyish-looking 35-year-old who ultimately proved to be an indispensable figure on the path to the White House.

“Honestly, Jared is a very successful real estate person. But I actually think he likes politics more than he likes real estate,” Trump said of his son-in-law Jared Kushner, standing to his right during a victory speech after the Indiana party primary election in May. “But he’s very good at politics.”

Kushner, the slender, clean-cut New Jersey real estate scion who married Trump’s daughter Ivanka in 2009, helped guide the Republican Trump to victory last week over Democrat Hillary Clinton and is poised to remain an influential adviser during his presidency.

Kushner emerged as an important voice early in Trump’s campaign, launched in June 2015. He was involved in almost every aspect of Trump’s campaign, offering advice on key personnel decisions, strategy, speeches, fundraising and other areas.

Late in the campaign, he began laying the groundwork for a possible Trump-run television network, in the event his father-in-law lost, according to a person familiar with the matter.

Kushner spearheads his family’s real estate development company, Kushner Companies, and is the publisher of the New York Observer weekly newspaper, which he acquired at age 25.

While a federal anti-nepotism law prohibits a president from hiring family members to serve in his administration, Kushner is set to remain a key insider and trusted confidant.

Kushner is a Harvard graduate with a New York University law degree and a master’s in business administration, is the son of American real estate developer Charles Kushner.

In 2011, Kushner brought in Vornado Realty Trust as a 50% equity partner in the ownership of the building.