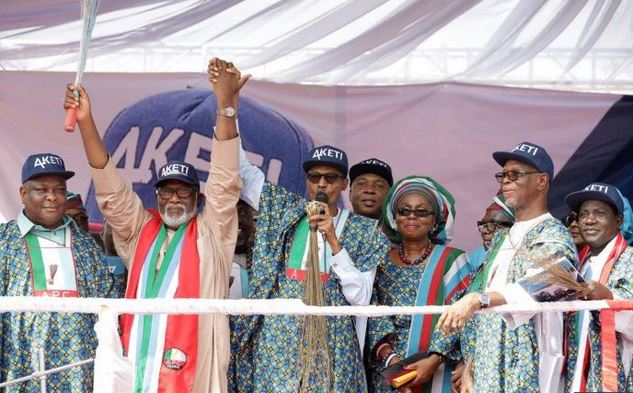 President Muhammadu Buhari on Saturday in Akure commended Ondo APC gubernatorial aspirants for their loyalty to the party and supporting Chief Oluwarotimi Akeredolu, the party’s candidate for the November 26 elections in the state.

Speaking at a meeting with the gubernatorial aspirants, APC elders in the state, and national officers of the party, President Buhari said the unity of the party was crucial for the outcome of next Saturday’s election.

“I am very pleased that those of you who lost the primaries are still very much in the party.

“That you lose elections doesn’t mean you should walk away, you keep on trying. I went to the Supreme Court three times in my bid to become the President of Nigeria.

“ I like your high spirit and your commitment to the party and I hope your constituencies are taking note of that,’’ the President told the aspirants shortly before departing for the Democracy Park in Akure for the grand finale of the Ondo APC gubernatorial rally.

The President, who was accompanied to the meeting by the Senate President, APC National Chairman, several APC Governors and Ministers, told the party faithful in Ondo that he looked forward to a successful election next week.

President Buhari assured Nigerians that determined, steadfast and patriotic people in the APC-led government will transform the nation’s ailing economy, which was run aground by the party that governed Nigeria for 16 years from 1999-2015.

In his remarks, the representative of the aspirants, Barr. Tunji Abayomi, assured the President that they have resolved to deliver Ondo to APC.

“No single aspirant left the party after the primaries. Those who left the party were not party members; they returned to where they belonged,’’ he said.

“We have fielded an experienced, informed, hardworking and capable legal practitioner to work with President Buhari to carry out massive industrial development, job creation, eradication of poverty and massive economic improvement in the nation,’’ he said.