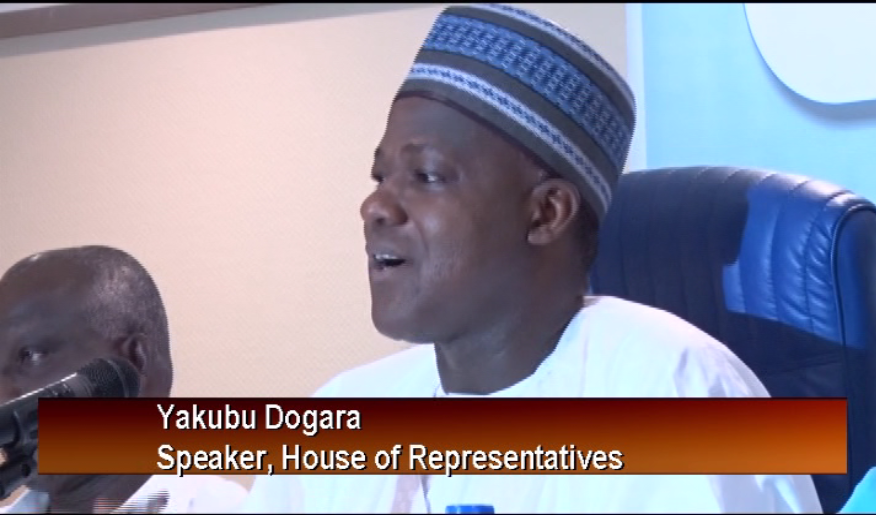 Those Fighting for Disintegration of Nigeria Won’t Succeed – Speaker

Those plotting and fighting for the dismemberment of the Nigerian state are bound to fail because God didn’t make mistake in bringing the various ethnic groups together in one country, Speaker of the House of Representatives Hon. Yakubu Dogara, has said.

Dogara spoke at the weekend during a reception organised by Northern Nigeria Christian Politicians to honour him and the Secretary to the Government of the Federation Engineer Babachir David Lawal in Abuja, according to a statement issued by his Special Adviser on Media & Public Affairs, Turaki Hassan on Sunday.

The speaker maintained that in bringing the various ethnic and religious groups together in one country, God didn’t make a mistake and advised those plotting the disintegration of the Nigerian state to have a rethink because their mission is bound to fail.

” For some of us who think Nigeria was a mistake, or that the North, having aggregated so many ethnic groups, and then two dominant force is a mistake, I want to advice us to do a rethink. ”

“The one who put together Nigeria and the North is God and he has the mandate. And anybody who is fighting for the disintegration of this country will not succeed because I believe that God has a plan for Nigeria and likewise, anyone for the elimination of any faith in Northern Nigeria or destruction of Northern Nigeria will not succeed because I believe God has a plan for northern Nigeria and until God is done with his plan, the north will remain as it is and Nigeria will remain as it is. If only one can upturn that, it means he is greater than God.”

Dogara also urged northern Christians to brace their muslim counterparts because of the former’s extension of olive branch as exemplified by the prominent role played by muslim leaders in his emergence as speaker and the appointment of Engineer Babachir David Lawal and the SGF by President Muhammadu Buhari.

He informed the gathering that there was no way he would have emerged speaker if northern Muslims did not support and vote for him.

Dogara said his emergence as Speaker and the appointment Mr. Lawal as SGF are pointers to the new thinking and resolve to return to the good legacies of Sardauna of Sokoto, the late Premier of northern Nigeria Sir Ahmadu Bello, who elevated prominent northern Christians into top government positions which helped in uniting the various peoples of the region.

“There are those who sincerely believe that the Christian community in the North deserve more among our Muslim brothers and I can tell you this, without that thinking, there is no way that I would have been standing here as the speaker of the House of Representatives.

” There are those who said look, time has come for the North to go back to those days of Sardauna where those who call themselves, or are referred to as the core North, will deliberately fashion out ways of compensating their brothers, Christians, in the North.

“It may interest you to know that that school of thought, obviously, I won’t mention everyone, but I will mention few. We got serious support from the present governor of Sokoto State, from the governor of Zamfara State, from people like Senator Wammako, Senator Ahmed Yerima, from people like Hon. Kawu Sumaila, who really, in spite of the fact that they had invested so much capital in building political networks and connections, they decided to go against this networks to ensure that this position is given to a Christian from the North.”

” It may interest you to know that in Sokoto State, we lost only two votes. If all the members only from Sokoto State had decided to vote for my opponent, there is no way we would have won that election. And in Zamfara, we lost one vote. ”

“What does that speak to us? That means there is an invitation to us as Christians to go back to our old ways. What ways? When we used to work together, we used to live together and it is only through that way that we can live in peace which is a key ingredient for development. ”

The speaker expressed appreciation to President Muhammadu Buhari, for appointing “one of our own as the secretary of the government to the government of the federation. Those who know the inner workings of government would know that that position combines many ministers together. And for us as a community, at least in my own lifetime, I don’t know what the elders have seen, I can this is the first time a northern Christian is holding that position.”

“Without peace, we cannot even practice our religion. And as long as we don’t enjoy peace in our region, there is no way that we will experience development because even if we are developed, lack of peace will destroy it. Syria is a case in point. So that is the challenge before us. As they open their arms to embrace us, we should also open our arms to embrace them so that we can write a new political history.”