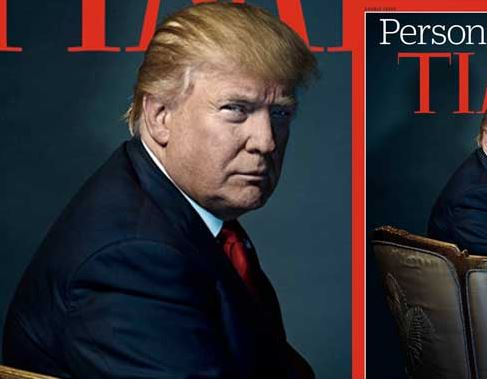 United States president-elect Donald Trump has been named Person of the Year by Time magazine.

The business tychoon-turned-politician defied the polls to win the US 2016 presidential election and is seen by many as a divisive standard bearer for right-wing anti-establishment movements across the globe.

“It’s hard to measure the scale of his disruption,” a statement released on Times magazine’s website reads, describing its choice as “for better or worse.”

US Election: Trump is the oldest President Elected in US History

Time magazine’s Person of the Year edition for 2016 has a photo of Donald Trump from behind, sitting in an upholstered armchair and looking over his shoulder towards the reader, with the title “President of the Divided States of America.”

Time editor Nancy Gibbs tells NBC News that his selection was “one of the more straight forward” choices that the magazine has made.

“It comes after the political novice scored a surprise victory in the November 8 elections.

“When have we ever seen a single individual who has so defied expectations, broken the rules, violated norms, beaten not one but two political parties on the way to winning an election that he entered with 100-to-1 odds against him?” she asked.

“I don’t think that we have ever seen one person operating in such an unconventional way have an impact on the events of the year quite like this.

According to Reuters , The magazine said its short list for person of the year included Clinton, Turkish President Tayyip Erdogan and singer Beyonce.

“It’s a great honor, it means a lot,” Trump told NBC’s “Today” show in an interview shortly after the announcement.

But he rejected Time’s characterization of the country as fractured. The magazine’s cover called him the “president of the divided states of America.”

“I didn’t divide them, they’re divided now,” he told NBC. “We’re going to put it back together.” He added: “I think putting ‘divided’ is snarky.”