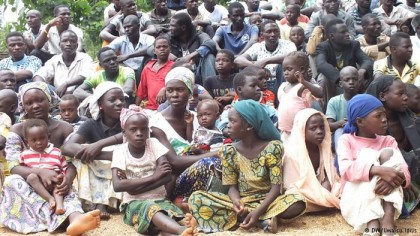 Yola, Adamawa, Nigeria-January 04, 2016: Internally displaced persons in Adamawa State who received food and relief items in December put religious and sectarian differences aside to thank their benefactors and pray for them.

At Churches and Mosques in Jimeta-Yola, and at other distribution points in the seven Local Government Areas most hit by the insurgency, grateful IDPs offered prayers for the donors, as well as for the members of Adamawa Peace Initiative, for continuously supplying the breadlines, even as Governments and local NGOs battle to contain the humanitarian crisis the northeast region of the country.

Medicines, blankets, vegetable oil, spaghetti, seasonings, salt, sugar, and rice that the IDPs received were bought with donations from three prominent philanthropists: Alhaji Mohammed Indimi, Alhaji Aliko Dangote, and the AUN Founder, AtikuAbubakar. The AUN Founder has been a leader in supplying continuous financial support for the IDPs since the University’s involvement with their feeding more than a year ago.

At the St. Theresa Catholic Cathedral Church, Jimeta, where 15,500 families were served in three distributions, a Muslim woman, Amina Mamman, joined the Bishop of Yola Catholic Diocese, Dr. Stephen DamiMamza, in leading prayers for peace in Nigeria and in expressing appreciation to those who made the donations to support IDPs in the state.

It was a similar story at the New Life Gospel Center, Demsawo, Deeper Life Camp, and at other centers where volunteers from the American University of Nigeria and Adamawa Peace Initiative distributed the food and relief items donated by Dangote Foundation. IDPs and local officials took turns to thank the donors, the peacemakers, Governor Mohammed Jibrilla of Adamawa State, and the volunteers who had worked tirelessly to alleviate their suffering during the year.

All through December, the AUN-API Team supplied food, medicines and relief materials to over 163,500 households through local religious and community-based organizations in the state.

Humanitarian aid was also sent to IDPs who had relocated to their destroyed homes, in the most insurgency-hit areas, through local contacts networking with AUN-API. According to the Coordinator of Relief for AUN-API, Bello Abdullahi, supplies were sent to IDPs in Maiha, Mubi North and South, Hong, Gombi, Michika, and Madagali LGAs through trusted API members working in those areas who ensured effective and accountable distribution of relief materials.

Coordinator of the Madagali distribution and President of Kinjir Foundation, Hon Saleh Kinjir, confirmed that over 552,000 households had received supplies from the Adamawa Peacemakers since the crisis peaked in 2014 through local partners of AUN-API including Kinjir Foundation, JIBWIS, Upper Room Cathedral and the Adamawa Muslim Council.

The food and medicines sent to IDPs in the seven most affected Local Governments were procured with a N100million donation which came from oil and gas tycoon, Mohammed Indimi, and which was passed on to API by the Governor of Adamawa State, His Excellency Mohammed Jibrilla, as well as funds given by former Nigerian Vice President AtikuAbubakar.

On October 14, an AUN-API team led by Bishop Mamza, Imam Dauda Bello and AUN’s Head of Security, Dr. Lionel Rawlins, dispatched supplies in a military-backed convoy to most of the worst-hit areas accompanied by foreign and local journalists.

Meanwhile, AUN President, Dr. Margee Ensign, who chairs the API, said the organization has initiated numerous programs in the community to benefit both indigenes and IDPs. “We have the all-year-long ‘Peace Through Sports’ program, two major income-generating projects for community women, and a new literacy program christened ‘Technology Enhanced Learning for All’.”

Under the literacy program funded by the US Government, 20, 000 vulnerable youth, including out-of-school children, displaced children, and those disadvantaged in schools who are not now learning how to read, will benefit.