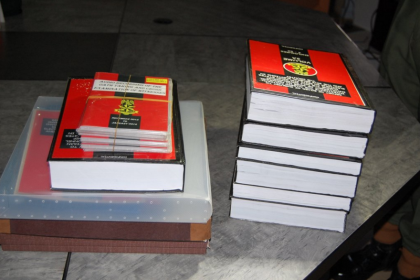 It will be recalled that based on petitions and allegations of unprofessional and partisan conducts of some officers and soldiers of the Nigerian Army during the 2015 General elections, Ekiti and Osun States Gubernatorial elections last year, the Nigerian Army set up a high powered Board of Inquiry. The Board after a thorough job had today, Monday 11th January 2016, submitted its report to the Chief of Army Staff at the Army Headquarters, Abuja.
Submitting the report, the Chairman of the Board, Major General Adeniyi Oyebade, the General Officer Commanding 1 Division Nigerian Army, stated that the Board placed advertorials in the media requesting for memoranda from the public before they commenced sitting. In all, he stated that 23 officers and over 100 soldiers appeared before it as well as 62 civilians.

According to him, the Board had made far reaching recommendations that would assist the Nigerian Army and the nation in the future. He further added that; 2 officers were recommended for compulsory retirement from the Nigerian Army, 3 were to loose their command and 1 was recommended for prosecution for collecting financial gratification. Other recommendations include placing 15 officers on watch list, 9 officers were to be further investigated by the Economic and Financial Crime Commission over allegations levelled against them. While 6 officers were to face an audit committee and 62 officers (mostly of the rank of Majors-below) were to be given Letters of Displeasure and to appear before their respective General Officers Commanding for counselling.

He thanked the Nigerian Army for the opportunity to serve and reiterated the Boards members willingness to serve when called upon for any other such assignment. He also acknowledged the support and cooperation they received from the Nigerian Police and other security agencies, as well as the general public. The Board also commended Captain Sagir Koli for his non-partisanship and professional conduct.

In his remarks while receiving the report, the Chief of Army Staff, Lieutenant General TY Buratai, thanked the Board for a thorough and dispassionate job devoid of influence from any quarters.

He expressed delight that the Board, knowing the gravity and implication of their report on the careers of officers and impact on the Nigerian Army, discharged their assignment diligently and professionally. He assured them that the report would be reviewed accordingly, in line with Nigerian Armys legal and administrative procedures.

The Chief of Army Staff also enjoined members of the Board to share knowledge acquired in the course of their assignment with their colleagues for the benefit of the Nigerian Army and the nation. He further reiterated assurances that the Nigerian Army would continue to remain professional and apolitical in the discharge of its responsibilities.