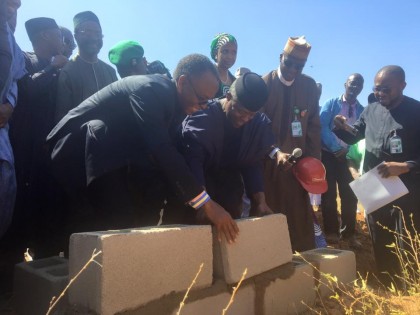 THE Change Agenda offered to Nigerians and for which the All Progressive Congress was elected into office is all about government meeting the needs of the people, according to Vice President Prof. Yemi Osinbajo, SAN.

He was speaking earlier today in Kaduna at the ground-breaking of construction projects spearheaded by the state governor, Mallam Nasir El-Rufai, whom the Vice President commended for doing what he promised the people of the state.

According to the Vice President, “when we talk of change, we are saying it is possible for government to meet the needs of the people, serving the people,” adding that the two projects – a 2000-unit residential housing scheme and a modern shopping mall- are evident of the fact “that change has truly come.”

Reiterating the commitment of the Federal Government under President Muhammadu Buhari to fulfill the promises made to the Nigerian people about change, Prof. Osinbajo noted that one of the reasons why people “voted for us is because they believed in change and that we are able to provide that kind of leadership.”

Continuing he said “I want to emphasize that when we talk of change, what we are really saying is that it is possible for government to meet the needs of the people, that government is not just about going around in motorcades and looking important, but it is serving the people.”

According to him, ”we are serious about prosecuting those who believed that our resources, the resources of the nation can be plundered at will and they give all kinds of excuses.”

The Vice President while restating the vision of the administration of President Muhammadu Buhari to transform the lives of the people said “President Buhari has said repeatedly he is committed to good governance and the fight against corruption.”

He observed that “the country has resources for all of us to live decently and well. That is what we are trying to do,” adding that whoever is guilty of stealing our resources would be brought to book as the President has often noted.

He highlighted some of the various intervention programmes of President Buhari such as the homegrown school feeding programme for primary school pupils across the country, making soft loans available to market women and artisans among others.

He commended the government of Mallam El Rufai for embarking on such ambitious projects noting that the governor represents the change that is being talked about, adding that under the governor, Kaduna State “will truly be great again.”

Earlier during the ground breaking ceremony for the construction of a Galaxy Mall and Galleria located near the Government House in Kaduna, Mallam El- Rufai disclosed that the project was conceived to generate 2, 000 direct and indirect jobs, create linkage opportunities for small businesses to grow as well as to improve the shopping experience of the people in the State.

While noting the Vice President’s “consistent support to me personally and to the government of Kaduna State,” Governor Rufai also announced that his administration and the State Assembly have decided to invest the N10 billion secured loan offered each state through the National Economic Council under the chairmanship of the Vice President in the provision of a befitting rail system for Kaduna metropolis.

Governor El Rufai commended President Buhari and the Vice President for their integrity and partnership, recalling with praise the help packaged last year by the presidency to help states get out of their economic challenges.

Vice President Osinbajo during his visit to Kaduna officially carried out the ground breaking ceremonies of a 2,000-unit affordable housing scheme for low income earners and that of the construction of the Galaxy Mall and Galleria. The first phase of the housing project will produce over 700 housing units.The Mall is a Public Private Partnership between the state government and the UAC Property Development Company.