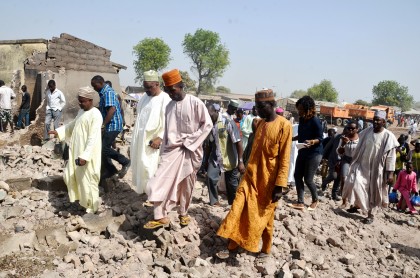 Community leaders in Adamawa state, under the aegis of the Adamawa Peace Initiative, a peacebuilding NGO in partnership with the American University of Nigeria, paid a sympathy visit to traders whose shops and wares were destroyed in the inferno that razed down major parts of Yola Town Market early in the New Year.

The ever-busy Gamzaki Market with traders from all over Nigeria was virtually laid waste by the fire disaster. No life was lost but more than 875 shops and 1,000 traders were affected. Chairman of the Gamzaki Traders Association, Ibrahim Mohammed, who gave the figures, received the AUN-API delegation to the scene of the fire.

After touring the wreckage, the Adamawa Peacemakers, led by Vice Chairman Jika Gambo, and Stephen Mamza, Catholic Bishop of Yola, sympathized with the fire victims, asking the traders’ union to identify areas of need so that AUN-API can support them. Chairperson of AUN-API, Dr. Margee Ensign, who was away in Washington on official representation, had conveyed her sympathies to the traders through the delegation.

Alhaji Jika addressed the victims saying, “It was pertinent to see for ourselves and give the report of the incident to the main body for appropriate action. It is indeed a sad situation, but the most important thing is for us to ask God to avert this kind of situation in the future.”

“I have been following your programs and your emphasis that Muslims and Christians are one… you can only tie a broom with one rope.” He described AUN-API as a common ground of “one voice and one heart towards each other.”

Taking cognizance of recent reports of fire outbreaks in three markets in Adamawa State, Alhaji Kachallah called on public-spirited individuals, non-governmental organizations, and the government to rally support for the traders who have lost their goods and shops to market fire in order to cushion the unforeseen hardship.

AUN-API delegates prayed for the strength to carry on especially at a time like this when Nigeria is facing an economic meltdown.