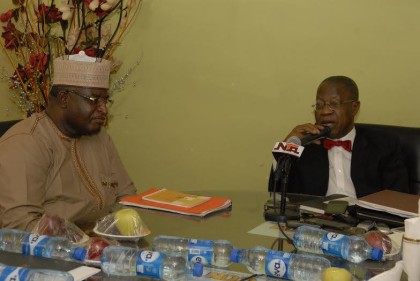 Minister of Information At APCON

The Minister of Information and Culture, Alhaji Lai Mohammed, has tasked the Advertising Practitioners Council of Nigeria (APCON) to always summon the courage and the political will to keep out offensive and inciting advertisements from the pages of newspapers and the airwaves.

The Minister, who issued the challenge during a working visit to the APCON headquarters in Lagos on Thursday, recalled how APCON, which is mandated to regulate advertisements, appeared to be incapacitated despite the hate and abusive advertisements and documentaries that dominated the 2015 general elections.

”Anybody who keenly watched the 2015 campaigns will tell you that adverts, mostly in the print, radio and television, were used to further deepen the country’s fault lines and people were wondering what APCON was doing

“When we turn a blind eye to offensive adverts and jingles, we might think it is going to help our political fortunes, but it might end up destroying the entire country,” he said.

Alhaji Mohammed said while APCON may be incapacitated by lack of manpower and the technology to adequately vet the advertisements that go into the media, it must insulate itself from political interference and remain professional to achieve its mandate.

He described APCON as a catalyst for the nation’s economic growth but noted that more needs to be done in terms of leveraging on technology to monitor over 6,000 channels and many newspapers disseminating information in the country for the organization to sufficiently add value to the economy.

“This is why I appreciate the request of the Registrar in getting APCON better technology to vet and monitor the airwaves in order to properly regulate advertisements,” the Minister said.

He said because APCON is very specialized, those to serve on its board must be professionals in order for them to be able to guide the regulatory body aright, instead of basing such appointments on political patronage.

In his remarks, the Registrar and Chief Executive of APCON, Alhaji Garba Bello Kankarofi, enumerated the various challenges hindering the operations of the organization, saying he is counting on the Minister’s vast experience and goodwill to surmount them.

He said apart from regulating advertisements, APCON is doing a lot in the area of manpower development through the various trainings it offers to address the deficit in the industry.

The Minister thereafter visited and inspected the facilities at the Lagos Office of the News Agency of Nigeria as well as the National Troupe, during which he watched the troupe’s rehearsal at the National Theatre.