Delivering news after the meeting held behind closed doors. Minority leader at both chambers explained that they have resolved to settle all aggrieved parties to entrench peace and unity within the party. 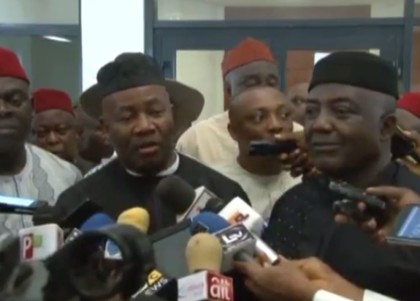 The essence is to enable party members speak with one voice at the forthcoming PDP national convention.

The minority leader of the Senate house, Senator Godswill Akpabio says, all members must attempt to unify the party.

He said a twelve man committee has been setup to meet the various aggrieved groups of the party, the governors in the party and the board of trustees. His counterpart in the lower chamber, Hon. Leo Ogor also said, all things been equal, it’s a clear fact that the Party will have a peaceful convention.

The minority leaders are optimistic that the convention will open up a new chapter in building a formidable party.