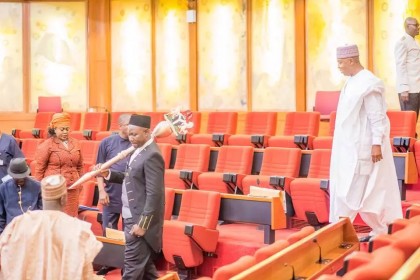 Muhammad Labbo, Abuja:’The interest of Nigerians is paramount, and should take precedence over any other interest, a group, the Buhari Media Support Group (BMSG), has admonished the Senate.

The BMSG in a statement signed by Muhammad Labbo, Coordinator and Cassidy Madueke, Secretary, views with disappointment the attempt by the Senate to blackmail the president into submitting to its whims and caprices by stampeding him to stop the court summons of principal officers of the Senate to defend themselves against allegation of forgery.

The BMSG believes that as lawmakers, the senators should be on the same page with the president and his administration to uphold the laws of the land.

The BMSG notes that rather than constitute themselves into obstacles in the quest to reposition the country and ensure obedience to rule of law, the distinguished senators should be seen to show good example to the citizenry.

Furthermore, we wish to remind the Senate that President Muhammadu Buhari has sworn to an oath to uphold the nation’s constitution, and no attempt should be made by any individual or group to undermine this sacred responsibility.

Additionally, it needs to be restated that the summons emanated from the petition raised by some senators over the forgery of the Senate standing order, a ground norm for conducting business in the hallowed chambers of the Senate.

The BMSG strongly believes that the individuals mentioned in the summons will have an opportunity in the court to prove their innocence, rather than using the hallowed chambers of the Senate to fan embers of division, and ill-feeling against the President.

The BMSG implores that as the representatives of their various constituencies, the senators should always work together with the executive to address the myriad of problems besetting Nigeria.

We therefore urge the Senate to immediately withdraw their uncouth language against the president and render an unreserved apology to Nigerians.