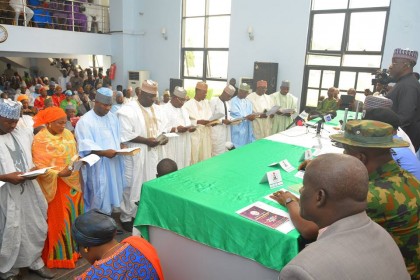 Barr. Haruna, S. I Esq., Keffi: The recent appointments of IMC made by Governor Umar Tanko Al-Makura is similar to a situation where a goal post is shifted to a different position when a game of football is already in progress.

The APC led Administration in Nasarawa state under the leadership of Governor Al-makura has no regard for the rule of law which is very dangerous to the state democracy and by extension national.

It is on record that the Ta’al administration today had sworn-in earlier appointed all the former elected executive chairmen of the local government council as sole Administrators of 11 of out the 13 Local Government in the state. The Governor now call them Interim Management Committee (IMC).

Governor Tanko Al-Makura has just done what we the Independent Democrats (ID) see as pure connivance with the state House of Assembly in merely changing the nomenclature from sole Administrators to IMC which we feel is an aberration and a total abuse of the rule of law and due process.

I Barr. Haruna the Chairman of (ID) maintain that whether it is sole Administrators or IMC. It is still not in agreement with the Law. We shall resist this impunity through due process of the law until the right thing is done.

The right thing under the circumstance is the conduct of the Council elections, for people to vote freely their own choice of people to govern the 13 Local Government in Nasarawa State.